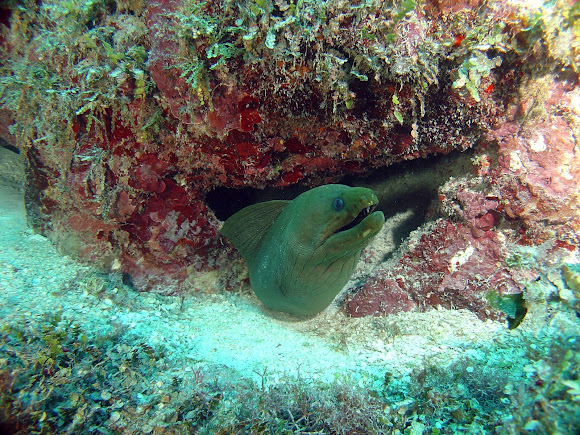 Photo take at -50 ft in a Caribbean reefthe most common and one of the largest of the moray eels. These eels average 1.8 m in length, but can grow up to 2.5 m long and weigh up to 29 kg. The dark green to brown color comes from a yellowish mucous that covers its blue skin to provide protection from parasites and infectious bacteria. Additionally, they are often camouflaged to hide in the reef from unsuspecting prey. Camouflage often extend into the mouth of the green moray which continually opens and closes slowly to move water over the gills for respiration. The large mouth features strong, pointed sharp teeth. The body is muscular with a long dorsal fin that extends down the length of the body starting from the head and ending in a short tail fin.

Found in the Western Atlantic: New Jersey (USA), Bermuda and northern Gulf of Mexico to Brazil. Recorded once from Nova Scotia, Canada. Eastern Atlantic and eastern Pacific. Usually on shallow waters on the coral rees and caves.