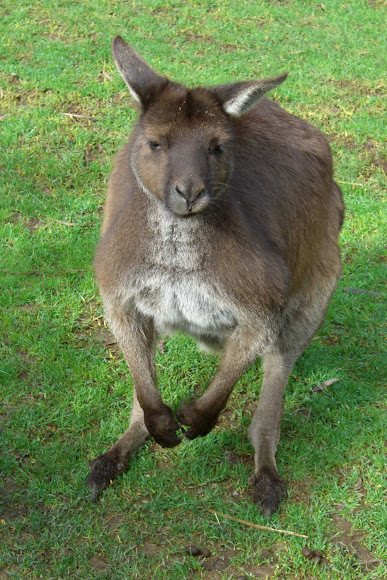 The Eastern grey kangaroo is the second largest and heaviest living marsupial and native land mammal in Australia. An adult male will commonly weigh around 50 to 66 kg (110 to 146 lb) whereas females commonly weigh around 17 to 40 kg (37 to 88 lb). Large males of this species are more heavily built and muscled than the lankier Red Kangaroo and can occasionally exceed normal dimensions. One of these, shot in eastern Tasmania weighed 82 kg (181 lb), with a 2.64 m (8.7 ft) total length from nose to tail (possibly along the curves). The largest known specimen, examined by Lydekker, had a weight of 91 kg (201 lb) and measured 2.92 m (9.6 ft) along the curves. When the skin of this specimen was measured it had a "flat" length of 2.49 m (8.2 ft). The eastern grey is easy to recognise: its soft grey coat is distinctive, and it is usually found in moister, more fertile areas than the red. Red kangaroos, though sometimes grey-blue in colour, have a totally different face than grey kangaroos. Red kangaroos have distinctive markings in black and white beside their muzzles and along the sides of their face. Grey kangaroos do not have these markings, and their eyes seem large and wide open. Where their ranges overlap, it is much more difficult to distinguish between eastern grey and western grey kangaroos, which are closely related. They have a very similar body and facial structure, and their noses/muzzles are fully covered with fine hair (though that is not obvious at a distance, their noses do look noticeably different from the noses of reds and wallaroos). The eastern grey's colouration is a light-coloured grey or brownish-grey, with a lighter silver or cream, sometimes nearly white, belly. The western grey is a dark dusty brown colour, with more contrast especially around the head. Indigenous Australian names include iyirrbir (Uw Oykangand and Uw Olkola) and kucha (Pakanh).[citation needed] The highest ever recorded speed of any kangaroo was 64 kilometres per hour (40 mph) set by a large female eastern grey kangaroo. (Wiki)

Although the red is better known, the eastern grey is the kangaroo most often encountered in Australia, due to its adaptability. Few Australians visit the arid interior of the continent, while many live in and around the major cities of the south and east coast, from where it is usually only a short drive to the remaining pockets of near-city bushland where kangaroos can be found without much difficulty. The eastern grey prefers open grassland with areas of bush for daytime shelter and mainly inhabits the wetter parts of Australia.[6] It also inhabits coastal areas, woodlands, sub-tropical forests, mountain forests, and inland scrubs. (Wiki)

Please consider adding this to the "Marsupials of the World" mission at http://www.projectnoah.org/missions/8445...