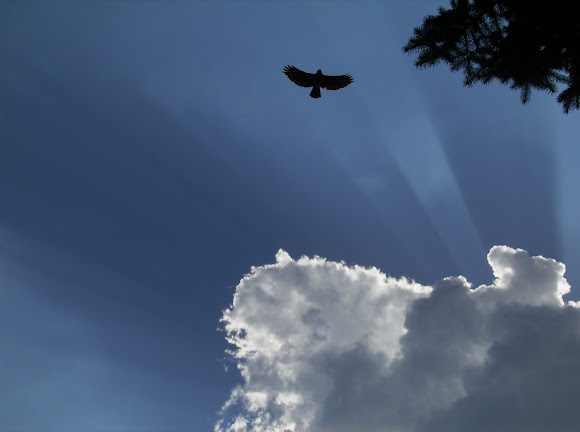 Large, broad-winged hawk. Raspy cry. The pair (5th photo) frequently called to each other. I observed them to feed on what appeared to be squirrels, and once a snake. Nest is huge - built in the largest tree in the vicinity (4th photo). Several favorite perches were frequented the surrounding area. Mobbing from smaller birds (2nd photo) was quite common.

Generally "woodlands, fields, plains, and deserts", but in this case, the largest suburban yard in the neighborhood with large, mature trees. The nest tree was only a few yards from my front porch.

These photos were taken between late April and early May of 2008 (I can claim no credit for the first image - it was a lucky instance of "no-time-to-look-just-point-up-and-hope-for-the-best".). During the spring of that year, I was utterly thrilled to have a pair of these breathtaking creatures nest in my front yard. I watched them every chance I got! I can't convey how thrilling it was to see them every day, and to hear them call to each other. Though this spotting ended in tragedy (one day I found a headless and badly decomposing hawk carcass in a forgotten corner of the yard. Given the very sudden disappearance of both birds, I am forced to consider the possibility that they may have been shot or poisoned), I maintain hope that other retails will eventually settle in the nest tree.