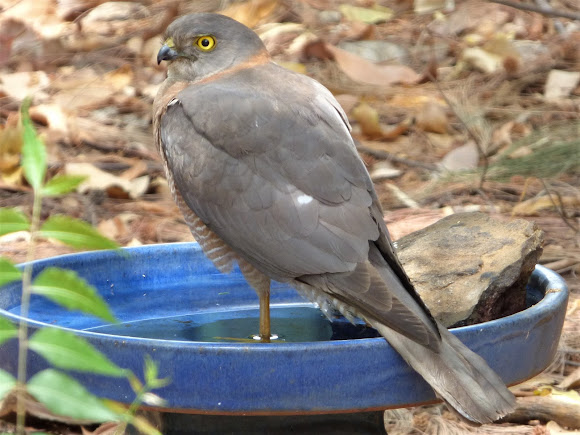 Collared Sparrowhawks "are small, fierce, finely built with rounded wings, long square tail, yellow eyes and long legs. Adults have slate-grey upper parts, sometimes with a brown wash, and a chestnut half collar [see pic 3]. The underparts are finely barred rufous and white. The under wing and tail are finely barred. The cere is cream to olive-yellow, the eyes yellow and the legs and feet yellow."

Standing in the raised bird bath in the backyard.

I heard a Willie Wagtail (Rhipidura leucophrys picata) and it sounded as though it was telling something off. So I looked outside and saw this Collared Sparrowhawk just standing there in the bird bath which is raised off the ground. I had noticed, probably the same one, only about a week ago, standing in the bird bath that was on the ground with a Willie Wagtail telling it off then too! It was aware of my observations through the window and when I pulled the louvers down it was comfortable enough to stay put. It did have a drink while I was watching and after about 10mins it lazily flew off...with the Willie following :)

You were in the right place at the right time to get this photo. My success has been nil to date even though there has been a Sparrowhawk hanging around here lately.

Thank you Rob! You are most welcome. I hope you have had a wonderful festive season :)

Great shots of this wonderful bird Liana and great info and background as usual. Thanks for sharing this spotting with us.

Sure was :D Thanks Jim! Sometimes it seems as though Willie is in charge of the whole yard! After this Sparrowhawk left I saw Willie quite happily standing on the edge of the bird bath (raised one), wagging its little tail, chittering away. Funny bird :)

It appears the bird bath was closed for a period yesterday, Liana. I understand why Willie was not happy. Nice photo series and summary!