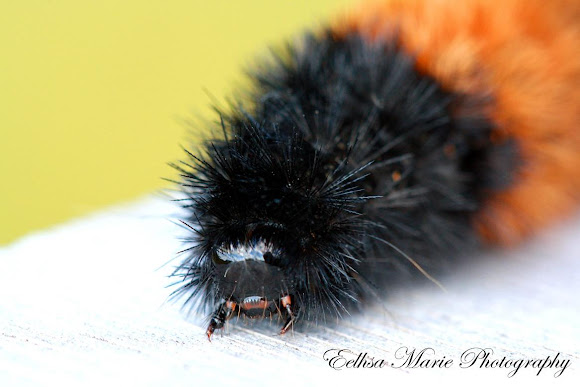 The Woolly Bear Caterpillar is the larvae stage of the Isabella Tiger Moth. The caterpillar has black hairs at both ends with an orange/brown band in the middle. Folklore from both Canada and the United States holds that the length and severity of the coming winter can be determined by the thickness of the band. (A narrow band means a harsh winter and a wider band means a milder winter). It's highly unlikely that such beliefs have any merit however, as caterpillars from the same hatch have been observed with bands of varying widths. The Woolly Bear Caterpillar is often seen in the late summer and throughout Autumn, as that is when it hatches. It will overwinter as a caterpillar, freezing solid. Once spring arrives the caterpillar unfreezes and pupates. The adult moth only has a few short days to find a mate. The entire life cycle of the Isabella Moth can be considerably lengthened for those who live in much colder climates with shorter growing seasons, such as the Arctic. In such locations these caterpillars have been known to live through as many as 14 winters before reaching maturity in the larval stage and pupating.

The Isabella Moth can be found in many colder climates, even as far north as the Arctic. The caterpillar feeds on many different types of plants, especially clover, sunflowers, asters, birches, elms and maples.

The Woolly Bear Caterpillar is one that is commonly observed in Northwestern Ontario. Last Autumn I found one as well, and I remember seeing them often while growing up. I spotted this particular one crawling across a parking lot. I've even seen these caterpillars crawling across the snow in late winter and early spring when it gets warm enough for them to unfreeze.