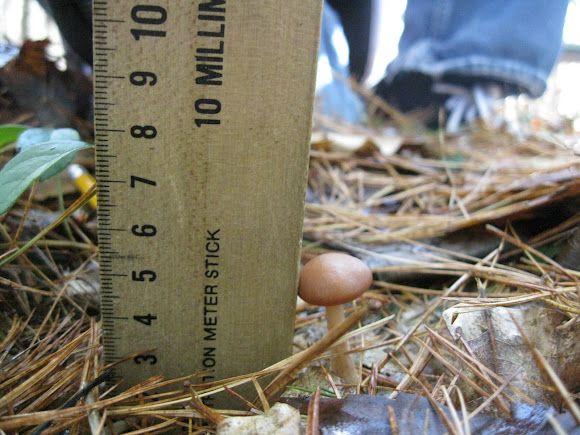 This mushroom was a chestnut/brown color. It also had a rounded cap that looked like a half circle. It was in the woods, pretty far in. There were some oak, and birch trees around the area. It was also near other mushrooms of its kind. Genus Lactarius Kingdom: Fungi Sub Kingdom: Dikarya Phylum: Basidiomycota Sub Phylum: Agaricomycotina Class: Agaricomycetes Order: Russulales Family: Russulaceae Genus: Lactarius

It was deep in the woods and was surrounded by many trees that are common to our area. (Oak, birch, maple) It was in a shaded area but sun was able to creep through the tree cover.

A Monday in November, Mr.P took his science classes out for a chance to collect mushrooms for the winter when we can’t go outside to investigate the pond area. Our task was to collect 2 of the same kind of mushrooms for spore print for an easier identification. We bring out scissors, a ruler, and a camera and get ready to find some mushrooms to identify. The second mushroom that my group and I found was a yellow and white mushroom. It was rather large but we also found a smaller one that seemed to be the same type. The outsides of the large mushroom came up while the middle sunk down. The middle of the mushroom was an orange color while the up edges were white. It was about the size of the palm of a childs hand. While the smaller one of the two the cap was more cyircular than the larger one. It was the same colors, orange in center and white on the outside. The stalk was white on both mushrooms and their gills were attached. This mushroom was found deeper in the woods than our first mushroom. This spot has mostly shade but some sun was visible through the tree tops. We think this mushroom is Genus Lactarius.