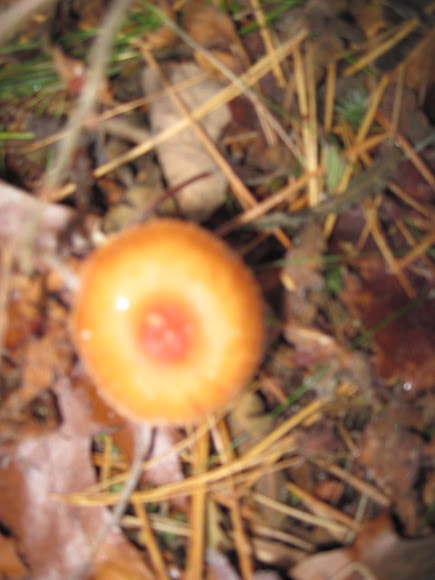 The mushroom is orange, but on the top of the cap there is an indent and it is red in the middle of the indent. And darker on the edges of the mushroom cap. The spore print is very dark reddish brown, like a dark rusty color. The gills are yellowish.

The habitat is next to a road in grass, on the edge of woods. So I think it could grow in the woods and on a road side and also, in a grassy field.

Our class when outside to collect mushrooms. My group only had me and another student because the other two were out. We were one of the groups that found the most mushrooms. There were so many interesting and foreign mushrooms! I had fun collecting and taking pictures of them. The first time it was freezing out, and the second time it was warmish. Some of the mushrooms smelled weird, and some were slimy. We collected 14 mushrooms in all. One of the mushrooms were very small and red with a green stem. And there was a orangish-brown mushroom growing in the middle of them. It was very interesting, but I chose an orange mushroom with a red indent in the middle of it. There were about 4 of them close to each other and the some of the stems were absent, but others were about 3cm, or less. The whole mushroom was about 1-5cm tall and 1-4cm wide. Kingdom: Fungi Division: Basidiomycota Class: Agaricomycetes Order: Agaricales Family: Hydnangiaceae Genus: Laccaria

Hi there!
So, I found a mushroom that LOOKS like yours, it has the same color and reddish top. Although it looks like mine, some of our characteristics don't match. The top of your mushroom indents while mine doesn't. At the end of my research I came to the conclusion mine was a California Mushroom. We might (probably) have a different mushroom than each other with all these mushrooms this year! Nice Job!