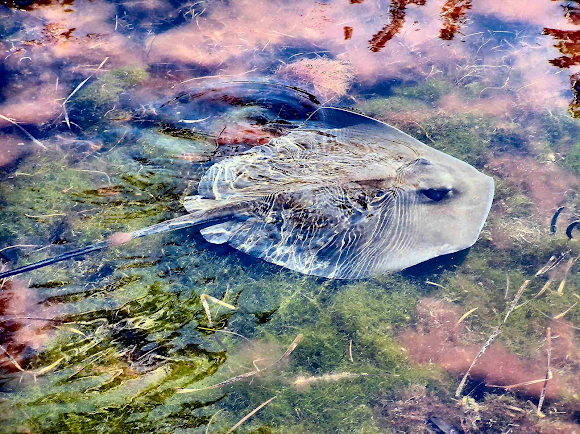 Southern Stingray spotted in bay side shallows at Islamorada, Florida.

The southern stingray, Dasyatis americana, is a stingray of the family Dasyatidae (the Whiptail Stingrays) found in tropical and subtropical waters of the Western Atlantic Ocean from New Jersey to Brazil. It has a flat, diamond-shaped disc, with a mud brown, olive, and grey dorsal surface and white underbelly (ventral surface). The barb on its tail is serrated and covered in a venomous mucous, used for self defense. The southern stingray is adapted for life on the sea bed. The flattened, diamond-shaped body has sharp corners, making it more angular than the discs of other rays. The top of the body varies between olive brown and green in adults, dark grey in juveniles, whilst the underside is predominantly white. The wing-like pectoral fins are used to propel the stingray across the ocean bottom, whilst the slender tail possesses a long, serrated and poisonous spine at the base, used for defence. These spines are not fatal to humans, but are incredibly painful if stepped on. The eyes are situated on top of the head of the southern stingray, along with small openings called spiracles. The location of the spiracles enables the stingray to take in water whilst lying on the seabed, or when partially buried in sediment. Water enters the spiracles and leaves through the gill openings, bypassing the mouth which is on the underside. Female stingrays can grow to a disc width of 150cm, contrary to the smaller male stingrays that reach maximum size at 67cm. (Credit: http://en.wikipedia.org/wiki/Southern_st...)

Glad you liked my shot... I was standing at a boat dock and the Stingray swam by me right under my feet. I only had time to "grab" a couple of shots - this was the only good one.