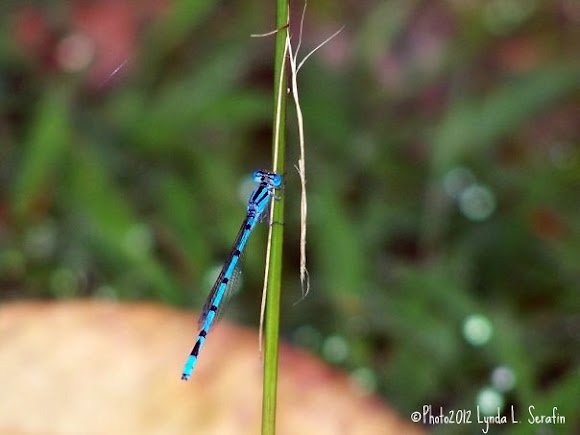 Common Bluetail Damselfly :Damselflies (suborder Zygoptera), typically being smaller than dragonflies, are sometimes confused with newly moulted dragonflies. However, once a dragonfly moults, it is already fully grown. There are other distinctions that set them apart: most damselflies hold their wings at rest together above the torso or held slightly open above (such as in the family Lestidae), whereas most dragonflies at rest hold their wings perpendicular to their body, horizontally or occasionally slightly down and forward. Also, the back wing of the dragonfly broadens near the base, caudal to the connecting point at the body, while the back wing of the damselfly is similar to the front wing. The eyes on a damselfly are apart; in most dragonflies the eyes touch. Notable exceptions are the Petaluridae (Petaltails) and the Gomphidae (Clubtails). The largest living odonate by wingspan is actually a damselfly from South America, Megaloprepus caerulatus (Drury, 1782) while the second largest are females of the dragonfly Tetracanthagyna plagiata (Wilson, 2009). The female T. plagiata is probably the heaviest living odonate.

Thank you.. I loved every minute of following him around my yard! :)