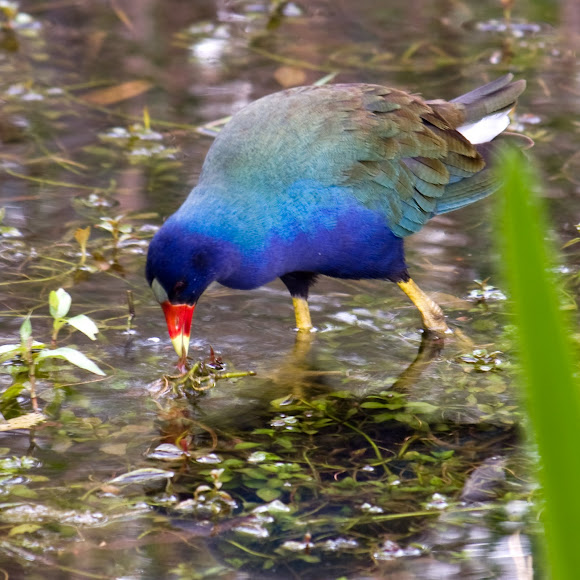 The American Purple Gallinule (Porphyrio martinica) is a "swamp hen" in the rail family Rallidae. A medium-sized rail (33 centimetres (13 in) in length) with big yellow feet, purple-blue plumage with a green back, and red and yellow bill. It has a pale blue forehead shield and white undertail. Juveniles are brown overall with a brownish olive back. Their breeding habitat is warm swamps and marshes in southeastern states of the United States and the tropical regions of Central America, the Caribbean and northern South America. This species is resident in southern Florida and the tropics, but most American birds are migratory, wintering south to Argentina. The nest is a floating structure in a marsh. Five to ten eggs are laid. Their coloration is buff with brown spots. The diet of these rails is omnivorous, being known to include a wide variety of plant and animal matter, including seeds, leaves and fruits of both aquatic and terrestrial plants, as well as insects, frogs, snails, spiders, earthworms and fish. They have also been known to eat the eggs and young of other birds. (Credit: http://en.wikipedia.org/wiki/American_Pu...)

Thanks for all your comments...
Purple Gallinule is one of my favorites and I photograph it at every oppty.
Its BIG feet are a big factor it its success as a forager... I have other postings that show how they use their oversized feet.
I've revised posting to include "The Color Blue" mission.
(btw, I used to reply to every comment by return email until I recently learned that it does not work that way. Apologies for delayed acknowledgements and replies.)

i love the galinules and this shot is amazing! you can add this to the new "color blue" mission:
http://www.projectnoah.org/missions/8382...