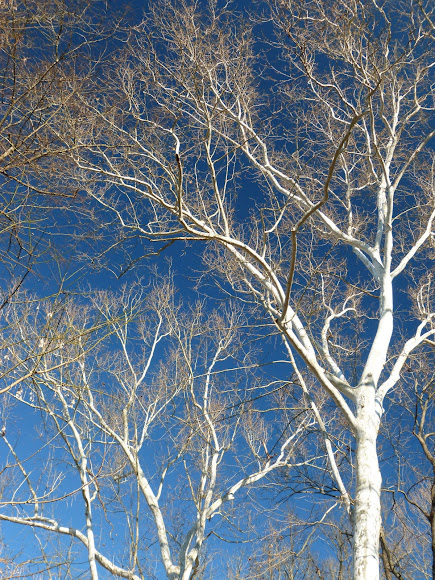 An American sycamore tree can often be easily distinguished from other trees by its mottled exfoliating bark, which flakes off in great irregular masses, leaving the surface mottled, and greenish-white, gray and brown. The bark of all trees has to yield to a growing trunk by stretching, splitting, or infilling; the Sycamore shows the process more openly than many other trees. The explanation is found in the rigid texture of the bark tissue, which lacks the elasticity of the bark of some other trees, so it is incapable of stretching to accommodate the growth of the wood underneath and the tree sloughs it off. A sycamore can grow to massive proportions, reaching up to 130 ft high and up to 6.6 ft in diameter when grown in deep soils. The largest of the species have been measured to 167 ft, and nearly 13 ft in diameter. Larger specimens were recorded in historical times. In 1770, near the junction of the Kanawha and Ohio Rivers, George Washington recorded in his journal a sycamore measuring nearly 45 feet in circumference at 3 feet from the ground.

I love the way this "ghost" sycamore stands out against the blue sky!

Thank you Dora! It was even more striking in reality - the photos don't do it justice!

Love the contrast of the white bark against the blue sky!

Thanks Carol! We spent the whole day out & saw hardly any birds or insects so this was about the best spotting of the day for us!

Karen, this is a really stunning photo of a tree. WOW!