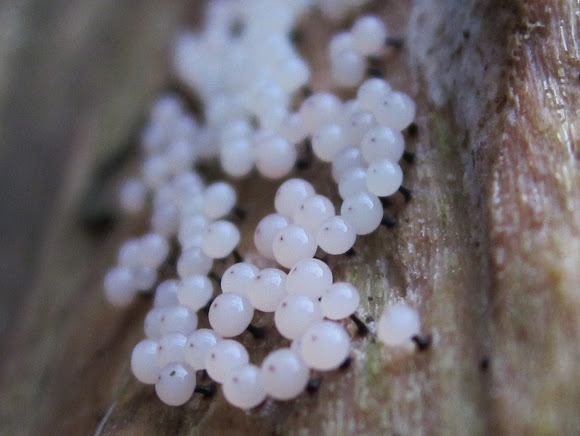 --- first i saw slug-egg-sized watery-white pearls but with a little black thread-like stem/stalk. I cut a little piece out of the tree-stem and by packing away, i accidental crusched/squeezed few fruitbodies against the seperated piece wood.It looked like snot with little black bristle. 2-3 hours later, when i came back home, they where discolored: from watery-white to dark-brown,black/metallic/sparkle-like. the snot-like consistens also change to chalk solidity. The round head has a darker spot at the center,when white: good to see and still after he changes black. ----the MATURED ones---->( http://www.projectnoah.org/spottings/832... ), ----the SPORES----->( http://www.projectnoah.org/spottings/845... ).

Plasmodium watery white. Sporocarps up to 1.5 mm tall. Stalk black, opaque, attenuate above, c. 50% total height. Sporotheca fuscous, up to 0.7 mm diam. Columella reaching to the top of the sporotheca and there forming a small, shining disk up to 0.2 mm diam. with the capillitium attached to the rim, the threads long, dark, flexuous and sparsely branched; in bark culture the apical disk is occasionally absent and then the capillitium arises from the length of the columella and the stalk is bottle-shaped. -( http://www.discoverlife.org/mp/20q?searc... )----discoverlife ---HABITAT: On dead wood

( http://slimemold.uark.edu/fungi/default.... ), ----- Slime mold or mould is a broad term describing protists that use spores to reproduce. Slime molds were formerly classified as fungi, but are no longer considered part of this kingdom. Their common name refers to part of some of these organisms' life cycles where they can appear as gelatinous "slime". This is mostly seen with the myxomycetes, which are the only macroscopic slime molds. Slime molds have been found all over the world and feed on microorganisms that live in any type of dead plant material. For this reason, these organisms are usually found in soil, lawns, and on the forest floor, commonly on deciduous logs. However, in tropical areas they are also common on inflorescences, fruits and in aerial situations (e.g., in the canopy of trees) and also grow in air conditioners, especially when the drain is blocked. In urban areas, they are found on mulch or even in the leaf mold in gutters. One of the most commonly encountered slime molds is the yellow Physarum polycephalum, found both in nature in forests in temperate zones, as well as in classrooms and laboratories. Most slime molds are smaller than a few centimeters, but some species may reach sizes of up to several square meters and masses of up to 30 grams. Many have striking colours such as yellow, brown and white ( http://en.wikipedia.org/wiki/Slime_mold )

actually, sadly consider i, the little woods or forest here not really as wild. They are more urban, no single location: where i search, is more than 1-2 km from the next city/village. To the big forest (the black forest/schwarzwald) of some big-reservation park, do i not come so often/till now.One favorite location is a 10 min walk away, between to village which lay 700m apart. almost all of my spotting are not more than 2-3 km from the next asphalt-street away , I learned, the important think is,keep your eye open. (excpect the unexcpectable;they are never where you want; don't Search for them,just find them)