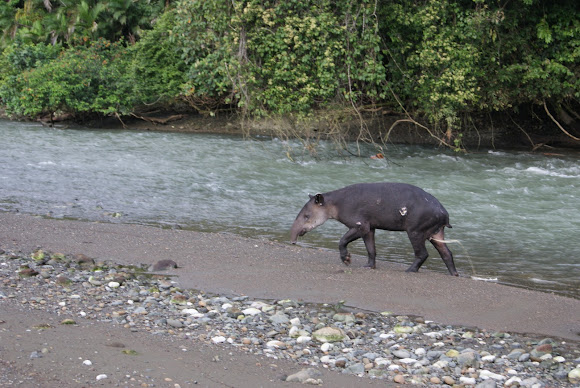 Baird’s Tapir has a distinctive cream-colored marking on its face and throat and a dark spot on each cheek, behind and below the eye. The rest of its hair is dark brown or grayish-brown. The animal is the largest of the three American species and, in fact, the largest land mammal found in the wild from Mexico to South America. Baird’s Tapirs average up to 2 metres (6.6 ft) in length and 1.2 metres (3.9 ft) in height, and adults weigh 150–400 kilograms (330–880 lb).[6][7] Like the other species of tapir, they have small stubby tails and long, flexible proboscises. They have four toes on each front foot and three toes on each back foot. Baird’s Tapir may be active at all hours, but is primarily nocturnal. It forages for leaves and fallen fruit, using well-worn tapir paths which zig-zag through the thick undergrowth of the forest. The animal usually stays close to water and enjoys swimming and wading – on especially hot days, individuals will rest in a watering hole for hours with only their heads above water.. It generally leads a solitary life, though feeding groups are not uncommon and individuals, especially those of different ages (young with their mothers, juveniles with adults) are often observed together. The animals communicate with one another through shrill whistles and squeaks. Adults can be potentially dangerous to humans if approached, so if you spot one in the wild approach with caution. Usually, at worst, the tapir may follow or even chase you for a bit- but people have been charged and gored on rare occasions in the past. (wikipedia)

This species is found from southern mexico to northern South America.

This pictures were taken near Sirena Station in Corcovado National Park, the river´s name is Rio Claro. If you look close at the picture you can recognize signs of fighting he has scratches and bites all around his body. The specimen is a juvenile male. He had a handfull of "garrapatas" in the inside of the ears. I had the chance to see him for about 2 hours while he was taking his daily afternoon bath. Incredible and rare animal.