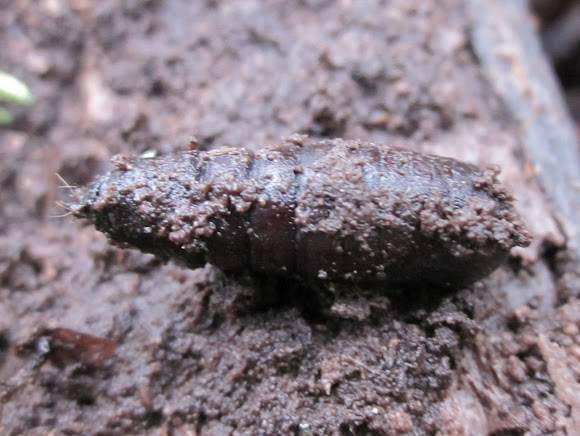 A pupa (Latin pupa for doll, pl: pupae or pupas) is the life stage of some insects undergoing transformation. The pupal stage is found only in holometabolous insects, those that undergo a complete metamorphosis, going through four life stages; embryo, larva, pupa and imago. (For a list of such insects see Holometabolism). The pupae of different groups of insects have different names such as chrysalis in the Lepidoptera order and tumbler in the mosquito family. Pupae may further be enclosed in other structures such as cocoons, nests or shells. Some pupae remain inside the exoskeleton of the final larval instar and receive the name of puparium (plural, puparia); the flies of the families Stratiomyidae, Syrphidae and others have puparia.

In the life of an insect the pupal stage follows the larval stage and precedes adulthood (imago). It is during the time of pupation that the adult structures of the insect are formed while the larval structures are broken down. Pupae are inactive, and usually sessile (not able to move about). They have a hard protective coating and often use camouflage to evade potential predators. -----Duration: Pupation may last weeks, months or even years. For example it is two weeks in monarch butterflies. The pupa may enter dormancy or diapause until the appropriate season for the adult insect. In temperate climate pupae usually stay dormant during winter, in the tropics pupae usually do so during the dry season. Anise Swallowtails sometimes emerge after years as a chrysalis

The scarlet caterpillar clup-fungus lives on dead pupa of various large butterflies, rarely also on caterpillars. it is common and widespread throughout the northern hemisphere and europe, fruitingbodies appear ​​ from August to November