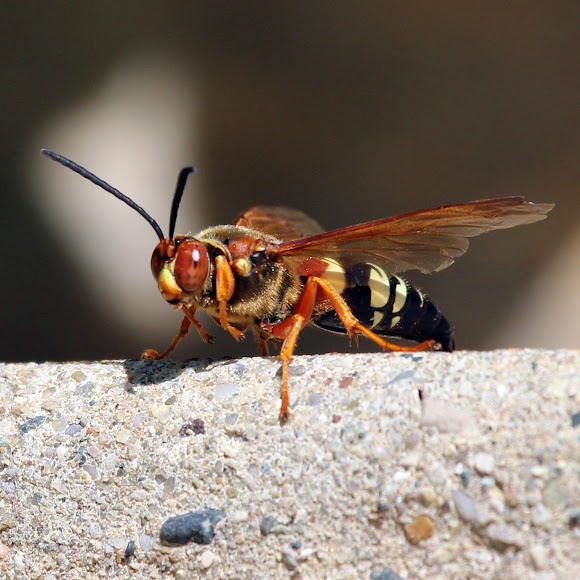 Adult eastern cicada-killer wasps are large, 1.5 to 5.0 centimetres (0.6 to 2.0 in) long, robust wasps with hairy, reddish and black areas on the thorax (middle part), and are black to reddish brown marked with light yellow stripes on the abdominal (rear) segments. The wings are brownish. Coloration superficially resembles that of some yellowjacket and hornet species. The females are somewhat larger than the males, and both are among the largest wasps seen in the Eastern United States, their unusual size giving them a uniquely fearsome appearance.

Found several Cicada Killer's on and around the cement sidewalk of a local nature preserve. It looked as if they had a burrow in the sandy soil next to the sidewalk.

They are so named because they hunt cicadas and provision their nests with them. In North America they are sometimes called sand hornets, although they are not hornets, which belong to the family Vespidae. Although cicada killers are large, female cicada-killer wasps are not aggressive and rarely sting unless they are grasped roughly, stepped upon with bare feet, or caught in clothing, etc.