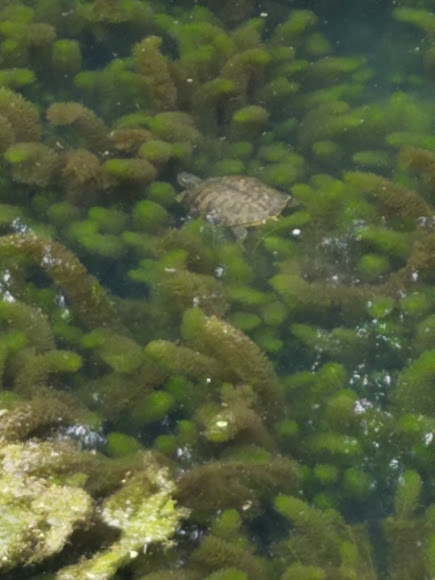 The western pond turtle (Actinemys marmorata), also known commonly as the Pacific pond turtle is a species of small to medium-sized turtle in the family Emydidae. The species is endemic to the western coast of the United States and Mexico, ranging from western Washington state to northern Baja California. It was formerly found in Canada, but in May 2002, the Canadian Species at Risk Act listed the Pacific pond turtle as being extirpated. The western pond turtle is omnivorous and most of its animal diet includes insects, crayfish, and other aquatic invertebrates. Fish, tadpoles, and frogs are eaten occasionally, and carrion is eaten when available. Plant foods include filamentous algae, lily pads, tule and cattail roots. Juveniles are primarily carnivorous, and eat insects and carrion. At about age three they begin to eat plant matter. Because of its hard shell, the western pond turtle is generally well protected. However, several predators do threaten this species, especially hatchlings, due to their small size and soft shell. Raccoons, otters, ospreys, and coyotes are the biggest natural threat to this turtle, and hatchlings have the additional threats of weasels, bullfrogs, non-native crayfish, and large fish. Sexually mature females of the western pond turtle produce 5–13 eggs per clutch. They deposit eggs either once or twice a year. They may travel some distance from water for egg-laying, moving as much as 0.8 km (1/2 mile) away from and up to 90 m (300 ft) above the nearest source of water, but most nests are within 90 m (300 ft) of water. The female usually leaves the water in the evening and may wander far before selecting a nest site, often in an open area of sand or hardpan that is facing southwards. The nest is flask-shaped with an opening of about 5 cm (2 in). Females spend considerable time covering up the nest with soil and adjacent low vegetation, making it difficult for a person to find unless it has been disturbed by a predator. The vast majority of western pond turtle hatchlings overwinter in the nest, and this phenomenon seems prevalent in most parts of the range, especially northern areas. This might explain the difficulty researchers have had in trying to locate hatchlings in the fall months. Winter rains may be necessary to loosen the hardpan soil where some nests are deposited. It may be that the nest is the safest place for hatchlings to shelter while they await the return of warm weather. Whether it is hatchlings or eggs that overwinter, young first appear in the spring following the year of egg deposition. Individuals grow slowly in the wild, and their age at their first reproduction may be 10 to 12 years in the northern part of the range. The western pond turtle may survive more than 50 years in the wild. -Wikipedia