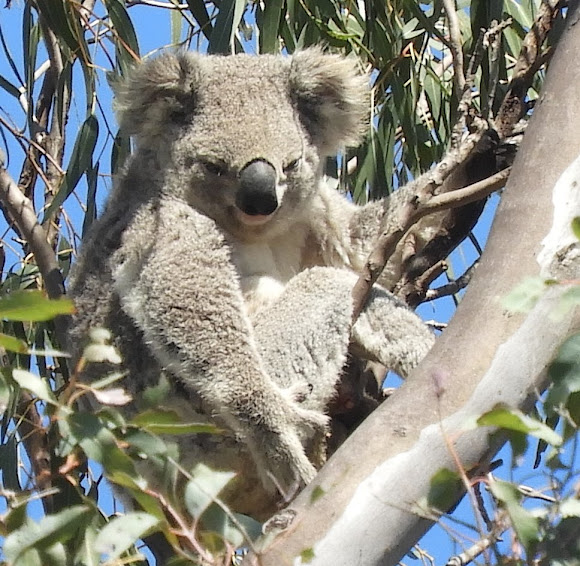 Stocky body with longish legs and arms. Broad, flat skull which, in comparison with the rest of the body, is quite large. Cat-like eyes that are round and smallish and of which the pupils are vertical slits. Large, bare, flattened nose. Ears are fluffy with longer white hairs. Thick, oily fur.

Up a Gum tree, at Kingaroy.

I get a thrill when I see Koalas around They're pretty unique, you see 'Cause Australia is their Homeland And that's very special, to me. First described in 1908 by E. Home. Three subspecies:- P. c. victor (Victoria); P. c. cinereus (New South Wales); P. c. adustus (Queensland). Victorian/Southern Koala females weigh 10 kilograms. Northern/Queensland Koala females are half the weight of the Sth. ones. Vic/Sth Koalas have darker fur to the Nth/Q'ld ones. Koalas have white underbelly, or ventral fur. Some Koalas have white fur in the small of the back. The rump consists of tougher connective tissue, which is dappled with white patches. Most of the day, the koala is inactive. Two to four hours, mostly in the early evening, are spent feeding. When at rest, the koala usually faces the trunk of the tree, with folded arms and palms inward.The body's weight is taken on a tough patch of rump, just above the 'tail', where it is padded with 'gristle'. On hot days, the koala sometimes exposes the white underbelly. Cold days see them curled up into a ball, so as to absorb solar radiation, through the dark dorsal (back) fur. This marsupial has the best and strongest developed pouch, due to its life-style, which involves much climbing - called phalangers - (koala) or hopping (kangaroo). Phalanger (n):- various small, arboreal marsupials of the Family Phalangeridae, of adjacent islands and Australia. They have long tail - kangaroo; dense, woolly fur - koala, or they burrow - wombat and bandicoot. Phalanges (pl.n.):- phalanx (s.n) - Bones of fingers or toes. Peculiar structure of second and third toes of its hind feet. Feet and hands have long, pointed claws. Hand (manus) has five similar sized digits. First digit on the hind foot (pas) has no claw and is apart from the others, which are shorter than the ones on the hand. Two of these digits are partially fused and are used like a comb, for grooming. Koalas usually eat about a pound (453grams), of leaves, per day. Require five times that amount to pick from. Often sniff the leaf, choosing the best. Food trees:- Red River Gum; Lemon-scented Gum; Queensland Grey Gum; Tasmanian Blue Gum; Scribbly Gum; Messmate; Blackbutt - to name a few. These have been verified observations. Depending on the rainfall, the Eucalyptus leaf is 50% water; 18% fibre; 13% tannins; 8% fat; 5% sugar and starch; 4% protein and 2% minerals. Koalas have a set of 30 teeth - incisors; canines; premolars and molars. From the upper jaw, at the front of the mouth, are three pairs of incisors. First pair are chisel-shaped and sharp. Other two pairs are stump-like. From the lower jaw and directly below those first sets, sit two sharp, large incisors, which project slightly outward and, as in an arc, are curved. These bear the full leverage of the powerful jaw muscles. Towards the rear of the mouth is a large space, filled only by a pair of small canines, projecting from the upper jaw. At the end of the gap are the premolars - a pair on each side. These are important teeth, as they are the ones used to strip leaves off branches. At the rear of the mouth are the large molars. These teeth are uniquely shaped for the repetitive action of grinding. Koalas can also stash food into cheek-pouches, for later consumption. Koalas have a remarkable digestive tract. From the mouth, the food that has been ground, goes down the muscular, tube-like esophagus. These muscles contract in a wavelike manner. Koalas stomach is quite small - about baseball size. Starch is well on the way to breaking down. Acids and enzymes begin to breakdown the sugar and protein, in the stomach. Possible absorption of the eucalyptus oil also begins now. Food then travels into the ileum (equivalent to the small intestine). Fatty acids (lipids) are now broken down. Protein continues also to be reduced. The ileum plays a major role in first-stage nutrition entering the bloodstream. Following this preliminary processing, the largely still undigested food goes on to the most remarkable part of the koalas digestive tract. This is part of the 'hind gut' and made up of the colon; caecum and rectum. The caecum, which is a blind-ended pouch, is 200cm or more long, 10cm in diameter and sits between the colon and the ileum. It is an amazing structure and the greatest cause for notoriety, among zoologists and naturalists. The caecum inflates even more, after feeding and gives a 'pot belly' appearance - Boy, is that why I'm pot bellied!? The caecum is where micro-organisms feed upon and breakdown carbohydrates - a crucial process called symbiosis - which is the relationship between two or more different organisms, living together, especially one that is of benefit to all the organisms involved. Koalas use evaporative cooling in the airways, to regulate body temperature. They do this by increasing respiration rates. Can also decrease the amount of water loss in their urine. Marsupials lack a complete placenta - this is the semipermeable membrane, that gives the transfer of nutrients, from mum to the developing embryo, in the uterus. Marsupials form a yolk sack-like placenta, through which an outer membrane develops, surrounding the embryo. This is known as an amnion. Amnion:- thin, tough membranous sac that holds a watery fluid, in which the embryo is suspended. It's the inner one of two embryonic membranes. Female marsupials have a duplicate reproductive system. Single births. Pouch faces the rear. It has a drawstring-like muscle (sphincter), that the mum can tighten. References:- Locating Koalas in the Australian Bush - Scott Buckingham. Australia's Ancient Ones. Koalas - Ken Phillips. Reader's Digest Great Illustrated Dictionary. Videos :- https://youtu.be/ShXYBx9WAQE https://youtu.be/e0VAHSMQEqM https://youtu.be/JtsJV8VI-hY https://youtu.be/uoGBZuemWqY https://youtu.be/2zjJU_eNVM0

Koalas are so unique in the animal kingdom. Their physiology is amazing! Excellent spotting, and thanks for sharing.