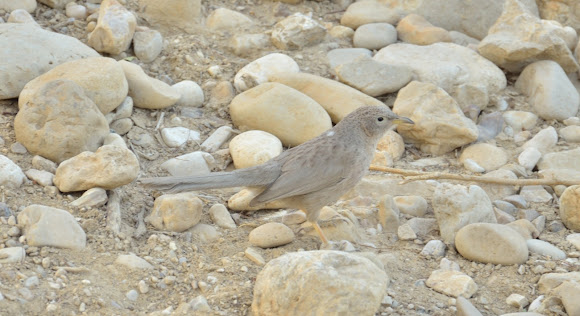 is a passerine bird belonging to the genus Turdoides, a genus of Old World babblers. It is 26–29 cm long with a wingspan of 31-33.5 cm and a weight of 64-83 grams. It has a fairly long curved bill, a long tail, rounded wings and strong legs and feet. The plumage is grey-brown above, paler below. There are dark streaks on the back and the throat is whitish. It has a variety of calls including whistles, trills and chattering. It is found in eastern, southern and western Arabia, occurring in the United Arab Emirates, Oman, Yemen and western Saudi Arabia but absent from the central and north-eastern parts of the peninsula. Its range extends north to Jordan, Israel and eastern Sinai. It inhabits arid scrubland and savanna, occurring up to 2800 metres above sea-level in Yemen. It mainly feeds on the ground and has a very varied diet including insects, small vertebrates, leaves, berries and seeds. The nest is a large cup of grass, twigs and other plant material. Three to five turquoise eggs are laid; sometimes more than one female will lay eggs in the same nest. They are incubated for 13 to 14 days and the young birds fledge after about 14 days. Arabian Babblers are very social birds living in territorial groups. Group size vary from 2 up to 22 birds. Usually a dominant male and female will breed and the other members of the group help with incubating the eggs and feeding the young. Babblers dance and take baths together, offer themselves gifts, clean themselves, and sometimes enter into conflict with each other for the privilege of helping another babbler. They may also feed their counterparts. This peculiar behaviour made them a privileged examples for ethological theories concerning altruism among animals. Starting in the 1970s, Amotz Zahavi observed the babbler at length, giving rise to his theory of signal and its correlative, the handicap principle. Although babblers were considered particularly altruistic animals, Zahavi reinterpreted their behaviours according to his theory. Thus, Zahavi (1974) theorized that chick feeding by Arabian Babbler helpers acts as a signal by the helper to gain social prestige within the group.