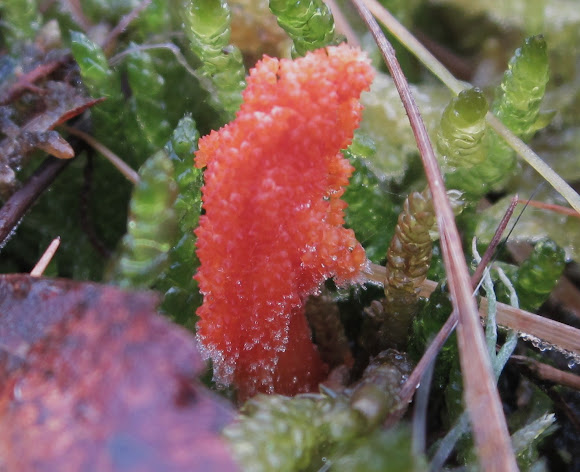 Cordyceps militaris is the best-known and most frequently collected bug-killing Cordyceps, but there are dozens of "entomogenous" species in North America. The victim for Cordyceps militaris is a pupa or larva (usually of a butterfly or moth). Its mycelium colonizes the living insect and mummifies it, keeping it alive just long enough to generate the biomass it needs to produce the mushroom--a "spore factory" that allows the Cordyceps to reproduce. With Cordyceps militaris the bug is buried in the ground or in well decayed wood, which means the mushroom collector usually sees only a little orange club with a finely pimply surface ( http://www.mushroomexpert.com/cordyceps_... ) {cool article, also in full lenght}

Medicinal importance Cordycepin, a compound isolated from the "Caterpillar fungus". The Cordyceps mushrooms have a long history as medicinal fungi. The earliest clear record is a Tibetan medical text authored by Zurkhar Nyamnyi Dorje in the 15th Century outlining the tonic propensities of Yartsa gunbu - Cordyceps sinensis renamed now to Ophiocordyceps sinensis, especially as an aphrodisiac. Although there are often-repeated claims of thousands of years of use in Traditional Chinese medicine, so far no clear textual source has surfaced. Cordyceps has been used to treat several conditions, recently also cancers. Extracts from both mycelium and fruiting bodies of C. sinensis, C. militaris and other Cordyceps species showed significant anticancer activities by various mechanisms such as, modulating immune system and inducing cell apoptosis. Some polysaccharide components and cordycepin (3'-deoxyadenosine) have been isolated from C. sinensis and C. militaris, which acted as potent anticancer components. Some work has been published in which Cordyceps sinensis has been used to protect the bone marrow and digestive systems of mice from whole body irradiation. An experiment noted Cordyceps sinensis may protect the liver from damage. An experiment with mice noted the mushroom may have an anti-depressant effect. Researchers have noted that Cordyceps has a hypoglycemic effect and may be beneficial for people with insulin resistance (wikipedia) ------ deadly for caterpillar ---- id-picture from the book ---> ( http://www.soortenbank.nl/soorten.php?so... ) ---- the caterpillar was already decaying, and the cordyceps-fruitingbody had some white fluff at one spot, if he isn't also started decaying, the the white fluff, could be new mycelium. but more likely could it also be an attack from another fungi.

Thanks Alex! Any help is greatly appreciated. :)

no problem, will do. And the next spot is again a little extra for your mission !

In any case, you've explained (and a person could just look at the comments also) quite well that these are deadly to the caterpillars, so I'm fine keeping spottings of fungi parasitizing another animal on the mission, provided that you keep giving those great descriptions of yours (which you usually do). :)

Hahaha there's also another alternative, Alex. You could start your own parasitic fungi mission and I'm sure it would be successful! I've seen a few spottings on this Project of things like ants and other insects being parasitized by fungi, and I'm sure that would make a very interesting mission. What do you think?

for human alone, is a bit boring. what is with all the parasitic fungi, harmfull for hosts (very interesting branch of this deadly fungi area). The "Auricularia auricula-judae"- "jew's ear" is also a medicinal fungi, he has compounds, usefull as cancer-prevention, but 1 full-grown person should not eat more than 500 g at the day. Otherwise get the medicinal fungi - unhealthy !! will you descibe your mission new, or will you let it so ??

Ah, I see. The mission I created for poisonous/deadly fungi was meant for harmful species through human consumption, as I think using a burried pupa as a substrate could go in a parasitic mission or something along those lines. That's my fault however, I should make my mission more clear, right?

this cordyceps species, has only some substances which have medicinal-use,not to just eat them, as with the caterpillar-cordyceps in azia. Additional is this species: deadly for insects- mostly burried pupas.

An irony: if it fits into the medicinal fungi mission (which I can confirm from reports that it does), shouldn't it not be harmful to humans, i.e. poisonous or worse?

To humans? I've looked through several resources and discovered at worst that its edibility is unknown, then from others that it is inedible, and from another that it is a choice edible ready for the plate. Now if it's unknown, it could go either way. If it's inedible, it's like a person trying to eat the bark of a tree; you CAN, but there's no point to it or there's no culinary value to it. If it's edible (known to be consumed), how can it be poisonous, much less deadly?

The mission is 'Poisonous and Deadly Fungi' and it's definitely 'deadly'.

That is a very amazing fungus Alex! I saw some images of and there are whole insects being used as food for these clubs, that's absolutely incredible. A question though: how does it fit into the poisonous fungi mission?

thanks to you all,
@clive s. -- that is the colorfullest cordyceps i saw, also at internet (and there you can see much!!) , More interesing do i find the Cordyceps lloydii -[ mushroomexpert ( http://www.utexas.edu/courses/zoo384l/si... )].

I think its really neat and cool.

What a fantastic find and series. Really excellent info too. Thanks for sharing this. As Alex says the Cordyceps is creepy but amazing stuff.

i had no clue, what you meant. but with internet is everything, very fast found. And . oh my god. i think i have seen some part before, as child! scary (back then) . Cordyceps reminds me also at: aliens !

Sounds like something out of The Day of the Triffids!