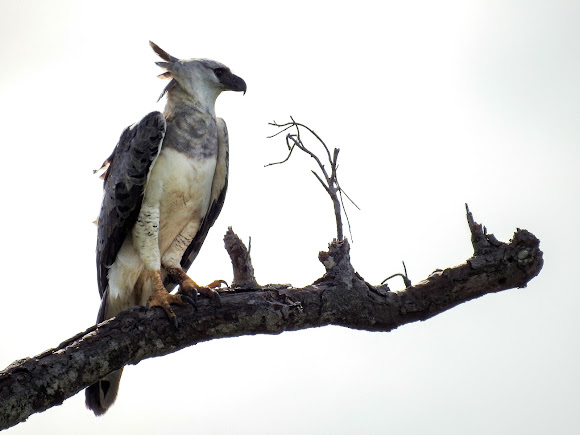 The harpy eagle (Harpia harpyja) is a neotropical species of eagle.It is sometimes known as the American harpy eagle to distinguish it from the Papuan eagle, which is sometimes known as the New Guinea harpy eagle or Papuan harpy eagle.[3] It is the largest and most powerful raptor found in the Americas,[4] and among the largest extant species of eagles in the world. It usually inhabits tropical lowland rainforests in the upper (emergent) canopy layer. Destruction of its natural habitat has caused it to vanish from many parts of its former range, and it is nearly extirpated in Central America. In Brazil, the harpy eagle is also known as royal-hawk (in Portuguese: gavião-real).

Rare throughout its range, the harpy eagle is found from Mexico (almost extinct), through Central America and into South America to as far south as Argentina. The eagle is most common in Brazil, where it is found across the entire national territory.[21] With the exception of some areas of Panama, the species is almost extinct in Central America, subsequent to the logging of much of the rainforest there.[22] The harpy eagle inhabits tropical lowland rainforests and may occur within such areas from the canopy to the emergent vegetation. They typically occur below an elevation of 900 m (3,000 ft), but have been recorded at elevations up to 2,000 m (6,600 ft).[1] Within the rainforest, they hunt in the canopy or sometimes on the ground, and perch on emergent trees looking for prey. They do not generally occur in disturbed areas, but regularly visit semiopen forest/pasture mosaic, mainly in hunting forays.[23] Harpies, however, can be found flying over forest borders in a variety of habitats, such as cerrados, caatingas, buriti palm stands, cultivated fields, and cities.[24] They have been found in areas where high-grade forestry is practiced.

The upper side of the harpy eagle is covered with slate-black feathers, and the underside is mostly white, except for the feathered tarsi, which are striped black. A broad black band across the upper breast separates the gray head from the white belly. The head is pale grey, and is crowned with a double crest. The upper side of the tail is black with three gray bands, while the underside of it is black with three white bands. The iris is gray or brown or red, the cere and bill are black or blackish and the tarsi and toes are yellow. The plumage of males and females are identical. The tarsus is up to 13 cm (5.1 in) long.[9][10] Female harpy eagles typically weigh 6 to 9 kg (13 to 20 lb).[9][11] One source states that adult females can weigh up to 10 kg (22 lb).[12] An exceptionally large captive female, "Jezebel", weighed 12.3 kg (27 lb).[13] Being captive, this large female may not be representative of the weight possible in wild harpy eagles due to differences in the food availability.[14][15] The male, in comparison, is much smaller and weighs only about 4 to 4.8 kg (8.8 to 10.6 lb).[9][11] Harpy eagles are 86.5–107 cm (2 ft 10 in–3 ft 6 in) long[10][11] and have a wingspan of 176 to 224 cm (5 ft 9 in to 7 ft 4 in).[9][10] Among the standard measurements, the wing chord measures 54–63 cm (1 ft 9 in–2 ft 1 in), the tail measures 37–42 cm (1 ft 3 in–1 ft 5 in), the tarsus is 11.4–13 cm (4.5–5.1 in) long, and the exposed culmen from the cere is 4.2 to 6.5 cm (1.7 to 2.6 in).[9][16][17] Upper body of an adult in captivity It is sometimes cited as the largest eagle alongside the Philippine eagle, that is somewhat longer on average and the Steller's sea eagle, that is slightly heavier on average.[8] The wingspan of the harpy eagle is relatively small, an adaptation that increases maneuverability in forested habitats and is shared by other raptors in similar habitats. The wingspan of the harpy eagle is surpassed by several large eagles who live in more open habitats, such as those in the Haliaeetus and Aquila genera.[9] The extinct Haast's eagle was significantly larger than all extant eagles, including the harpy.[18] This species is largely silent away from the nest. There, the adults give a penetrating, weak, melancholy scream, with the incubating males' call described as "whispy screaming or wailing".[19] The females' calls while incubating are similar, but are lower-pitched. While approaching the nest with food, the male calls out "rapid chirps, goose-like calls, and occasional sharp screams". Vocalization in both parents decreases as the nestlings age, while the nestlings become more vocal. The nestlings call chi-chi-chi...chi-chi-chi-chi, seemingly in alarm in response to rain or direct sunlight. When humans approach the nest, the nestlings have been described as uttering croaks, quacks, and whistles.[20]