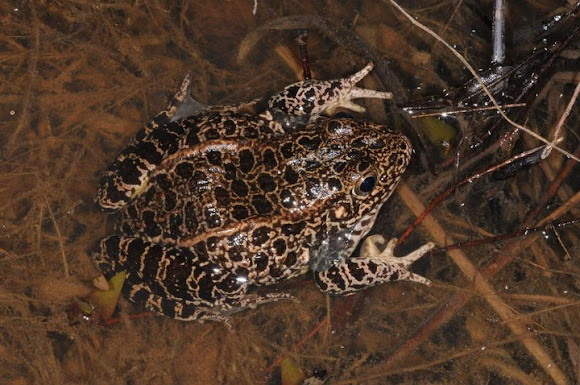 The crawfish frog grows from 2.2 to 3 inches (5.6 to 7.6 cm) in length. It ranges from yellow to brown in color, with a white ventral surface. There are numerous dark brown spots on its back that each has a light colored ring around it. They have a distinct skin fold on either side of their back, which are much more pronounced in males than females, and a relatively small tympanum.

Crawfish frogs are nocturnal, generally inhabiting open areas near permanent or ephemeral ponds. Unlike other species of frog commonly found in their range, such as leopard frogs (Rana blairi and Rana sphenocephala) and bullfrogs (Rana catesbeiana), outside of the breeding season, they are not often found sitting on the edge of the water, but instead prefer to make use of terrestrial crayfish burrows, often sharing them with another crawfish frog.

This was the herp highlight of 2011 for me. A friend tipped me off to a local population that I had previously never knew existed. He said Spring Break was about the time to start hearing them call, so I cased the pond nightly, listening for the obvious snore-like "waaah." I can't even describe my excitement the first time I heard it. I immediately donned my waders and grabbed my camera!

I got really good at imitating their call after spending so much time tracking them down in the pond. Hopefully you'll catch up with them next time.

Nice! I never got to see one, but I heard them constantly last summer, nearly drove me crazy looking for them. :P

Thank you. I just told my wife tonight that it's only 2.5 months until I begin stalking them again. I hope to get better photos this year.

What an amazing-looking frog ! - he's wearing a crocodile leather outfit, surely!!. Great photo too - thanks.