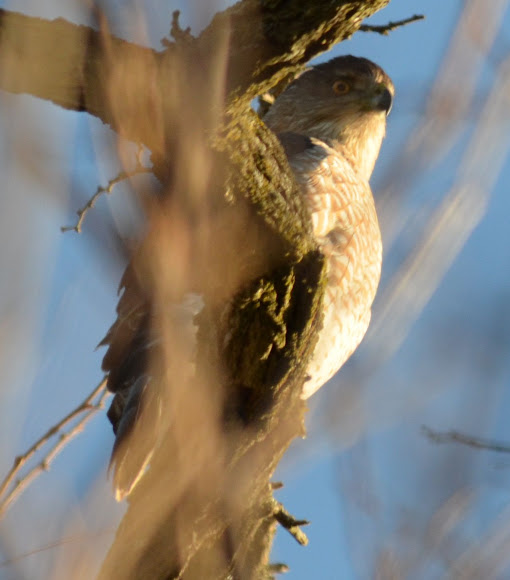 A medium-sized hawk native to the North American continent. All have short rounded wings and a very long tail with dark bands, round-ended at the tip. Adults have red eyes and have a black cap, with blue-gray upper parts and white underparts with fine, thin, reddish bars. Their tail is blue gray on top and pale underneath, barred with black bands. Immatures have yellow eyes and have a brown cap, with brown upper parts and pale underparts with thin black streaks mostly ending at the belly. Their tail is brown on top and pale underneath, barred with dark bands. The eyes of this hawk, as in most predatory birds, face forward, enabling good depth perception for hunting and catching prey while flying at top speeds. They have hooked bills that are well adapted for tearing flesh of prey.

The Cooper’s Hawk occur in various types of mixed deciduous forests and open woodlands, including small woodlots, riparian woodlands in dry country, open and pinyon woodlands, and forested mountainous regions and also now nests in many cities. They were once thought to be adverse to cities and towns, but are now fairly common urban and suburban birds.