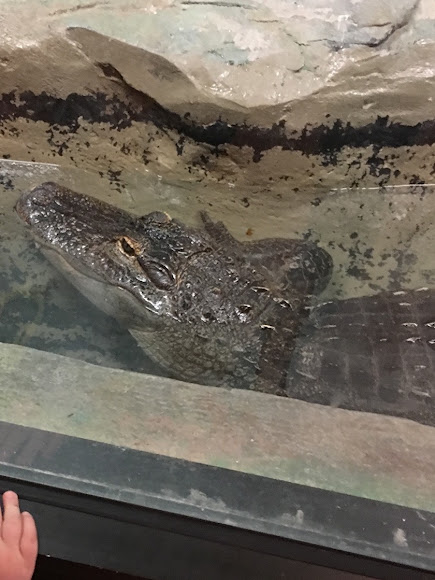 I saw this American alligator, being exhibited at a park, in Pennsylvania. Class: Reptilia Order: Crocodilia Family: Crocodylidae Genus: Alligator Species: A. mississippiensis - Alligators are carnivorous, and feed on a variety of other animals. These animals can include: fish, turtles, birds, frogs, and small mammals such as squirrels or deer. Adult male alligators, are generally larger than females, and grow to approximately 13 to 14 feet, from nose to tip of the tail. Females grow to be 9 to 10 feet in length. Males generally weigh between 400 to 600 pounds, but can weigh as much as 1,000 pounds. Alligators, like other reptiles, are cold-blooded. During hibernation, alligators wil not eat, and will seldom move. The American alligator, has a large lizard-like body with four short legs, and a long muscular tail. An alligator's hide, is rough and scaled. Adults are a uniform dark color.

American alligators, are located in southeastern United States. They can be found in the following states: North and South Carolina, Georgia, Florida, Alabama, Mississippi, Louisiana, Texas, and Arkansas. The habitat of American alligators, includes: freshwater streams and rivers, swamps, lakes and marshes. Alligators are found in both natural, and man-made freshwater lakes, ponds, rivers, and wetland areas.

I saw this American alligator, being exhibited at a park, in Pennsylvania.