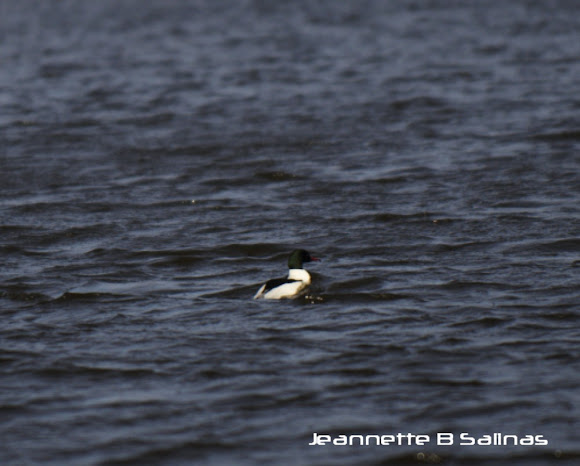 The Common Merganser (North American) or Goosander (Eurasian) Mergus merganser is a large duck, of rivers and lakes of forested areas of Europe, northern and central Asia, and North America. It eats fish and nests in holes in trees. John James Audubon called this bird the "Buff-breasted Merganser" in his book The Birds of America. It is 58–72 cm (23–28 in) long with a 78–97 cm (31–38 in) wingspan, and a weight of 0.9–2.1 kg (2.0–4.6 lb); males average slightly larger than females but with some overlap. Like other species in the genus Mergus, it has a crest of longer head feathers, but these usually lie smoothly rounded behind the head, not normally forming an erect crest. Adult males in breeding plumage are easily distinguished, the body white with a variable salmon-pink tinge, the head black with an iridescent green gloss, the rump and tail grey, and the wings largely white on the inner half, black on the outer half. Females, and males in "eclipse" (non-breeding plumage, July to October) are largely grey, with a reddish-brown head, white chin, and white secondary feathers on the wing. Juveniles (both sexes) are similar to adult females but also show a short black-edged white stripe between the eye and bill. The bill and legs are red to brownish-red, brightest on adult males, dullest on juveniles. (Wiki)

In Denmark where this was taken it is not very common. Only 50 pairs, so I was happy to see it. Unfortunately it never came close to get better shots :)