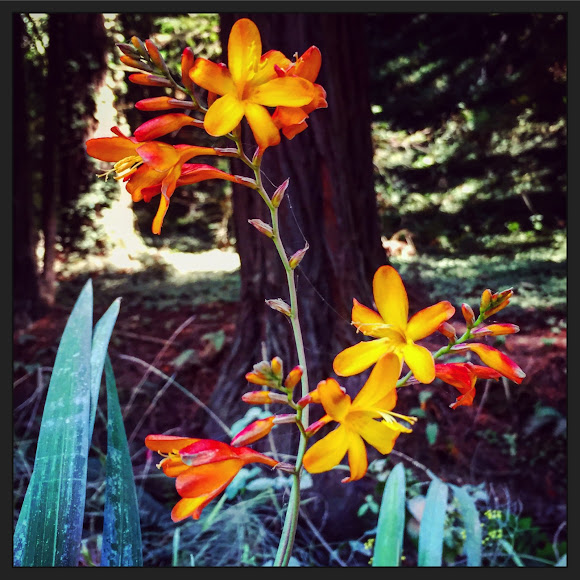 Crocosmia × crocosmiiflora is a garden hybrid of C. aurea and C. pottsii, They are commonly known in the United States as coppertips or falling stars. first bred 1880 in France by Victor Lemoine.[1] This hybrid is known to gardeners as "Montbretia."[2] Cultivars within C. × crocosmiiflora include: 'George Davidson' Yellow [3] ‘His Majesty’ Flowers large, orange. 'Jackanapes' Flowers orange-red, inner lobes golden yellow. 'Meteor' Orange yellow ‘Solfatare’ Yellow flowers with bronze foliage. They can be evergreen or deciduous perennials that grow from basal underground corms. The alternate leaves are cauline and ensiform (sword shaped). The blades are parallel-veined. The margin is entire. The corms are unusual in forming vertical chains with the youngest at the top and oldest and largest buried most deeply in the soil.[citation needed] The roots of the lowermost corm in a chain are contractile roots and drag the corm deeper into the ground where conditions allow. The chains of corms are fragile and easily separated, a quality that has enabled some species to become invasive and difficult to control in the garden. They have colourful inflorescences of 4 to 20 vivid red and orange subopposite flowers on a divaricately (horizontally) branched stem. The terminal inflorescence can have the form of a cyme or a raceme. These flower from early summer well into fall. The flowers are sessile on a flexuose arched spike. The fertile flowers are hermaphroditic. All stamens have an equal length. The style branches are apically forked. They are pollinated by insects, birds (hummingbirds) or by the wind. The dehiscent capsules are shorter than they are wide.

In the United States, Crocosmia × crocosmiiflora is considered suitable for planting in hardiness zones 5-9, but in more northerly locations it can be planted in the spring and the corms dug out in the fall. The corms should be planted in a well-drained garden soil in a full sun to partial shade.[2][4] The hybrid will set viable seed that can be grown from seed as soon as ripe, but as a hybrid will not breed true.[2] In Belfast, Northern Ireland it is recorded as well-established in a wide range of locations.[5]

Considered Invasive. A yellow dye is obtained from the flowers and used as a saffron substitute for colouring foods. https://www.seamwork.com/issues/2015/05/...

Crocosmia sp., probably a garden hybrid Crocosmia x crocosmiiflora. They come from Africa, but are cultivated all over the world.

A very pretty, and a very colorful photo....