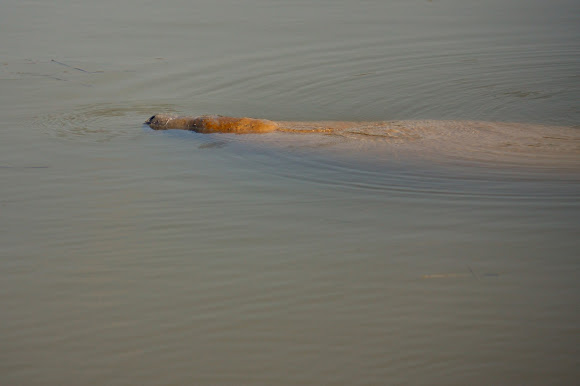 The Florida manatee (Trichechus manatus latirostris), a subspecies of the West Indian manatee, is the largest of all living sirenians. Florida manatees inhabit the most northern limit of sirenian habitat. They are found in fresh water rivers, in estuaries, and in the coastal waters of the Gulf of Mexico and the Atlantic Ocean. Florida manatees may live to be greater than 60 years old in the wild. The biggest single threat to Florida manatees is death from collisions with recreational watercraft. Large concentrations of Florida manatees are located in the Crystal River area and also Wakulla Springs regions in central and north Florida. The best time to see the Wakulla Springs manatees are in November and December, and in the spring for the Crystal River manatees. The West Indian Manatee (Trichechus manatus) is a manatee, and the largest surviving member of the aquatic mammal order Sirenia (which also includes the Dugong and the extinct Steller's Sea Cow). The West Indian Manatee, Trichechus manatus, is a species distinct from the Amazonian Manatee, T. inunguis, and the West African Manatee, T. senegalensis. Based on genetic and morphological studies, the West Indian Manatee is divided into two sub-species, the Florida Manatee (T. m. latirostris) and the Antillean Manatee or Caribbean Manatee (T. m. manatus). However, recent genetic (mtDNA) research suggests that the West Indian manatee actually falls out into three groups, which are more or less geographically distributed as: (1) Florida and the Greater Antilles; (2) Central and Northern South America; and (3) Northeastern South America. Like other manatees, the West Indian Manatee has adapted fully to an aquatic life style, having no hind limbs. The average West Indian Manatee is approximately 2.7–3.5 m (8.9–11 ft) long and weighs 200–600 kg (440–1,300 lb), with females generally larger than males. The largest individuals can weigh up to 1,500 kg (3,300 lb) and measure up to 4.6 m (15 ft). The Manatee's color is gray or brown. Their flippers also have either 3 or 4 nails so they can hold their food as they are eating. In the winter, West Indian Manatees can be found in Florida. During summer, these large mammals have even been found as far north as New York City, New York and as far west as Texas. (Credit: http://en.wikipedia.org/wiki/West_Indian...)

saw one of these jetskiing and freaked out. these things are big.

Thanks for joining the Manatee mission!!

This would be a great addition to the Florida Manatee mission! Please consider joining! http://www.projectnoah.org/missions/8472......