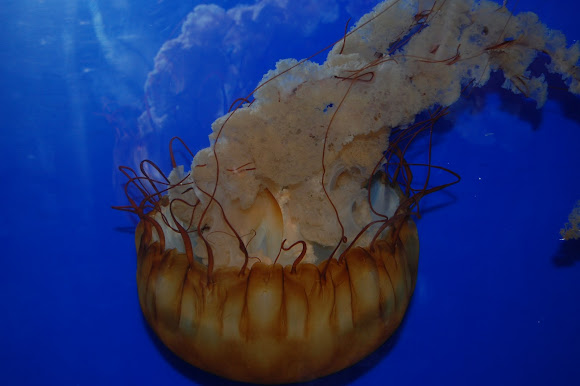 Despite their name, jellyfish are actually not fish! Jellyfish are made up of over 95% water, and they do not have brains, hearts, gills, bones, or blood. So, if jellyfish are not fish, what are they? Jellyfish belong to an animal group called invertebrates, because they do not have backbones. Fish are vertebrates, because they have backbones. Sea Nettle (Chrysaora) is one of the genus of Scyphozoa class of the phylum Cnidaria. The species of sea nettle we are most commonly knowledgeable about are Chrysaora quinquecirrh, which is mostly found along the east coast of North America in the Atlantic Ocean, and Chrysaora fuscescens, which is mostly found along the west coast of North America in the Northeast Pacific Ocean. The Sea Nettle is semi-transparent and has small whitish dots and reddish-brown stripes. In some cases, these stripes and dots are missing, and they make the sea nettle look whitish and opaque. The sea nettle is saucer-like in shape. The bell of the sea nettle usually grows to about 6 to 8 inches in diameter. It also has four oral arms attached to the underside of the mouth. In addition to this, it has a number of long tentacles, along the margins of its body, which extend for several feet. Sea Nettles are equipped with a number of nematocysts along their oral arms and tentacles. These nematocysts are like capsules with a coiled thread inside it, which is lined with barbs along its length. The thread contains powerful paralyzing toxins within itself. When a sea nettle comes in contact with any hard surface and pressure is applied to the tentacles, these nematocysts get activated and the thread starts uncoiling. They get fired into the surface in its contact and inject their powerful venom into it. This is how the sea nettle catches its prey to feed upon. Unlike many species of jellyfish, who only subsist on microscopic plankton and zooplankton, in addition to these, the sea nettle also eats a number of significantly larger preys. A number of sea nettle species are known to eat young minnows, bay anchovy eggs, worms, and mosquito larvae amongst other creatures. Sea nettle is also known to feed upon other jellyfish and jellyfish larvae. This same mechanism is used by sea nettle when it encounters danger like a large predator. It stings the predator with its numerous nematocysts and injects its toxins into the flesh of the predator. In the case of smaller creatures, this venom is strong enough to cause death. In larger animals, it usually produces a paralyzing effect, which gives the sea nettle enough time to escape. In the case of humans, their sting is considered moderate to severe. In most cases, it produces a rash that can be extremely painful for 20 to 30 minutes. The rash is likely to feel extremely prickly and may be accompanied by a burning sensation. The symptoms can be more severe in the case of sensitive individuals. Also, the venom from the sting may cause allergic reactions that can become very serious, and sometimes even fatal. The risk to an individual also increases if he or she has been stung multiple times by one or more sea nettles. It is important to remember that sea nettles don't 'attack' human beings. The sting is just a part of their natural survival mechanism. Ideally, care should be taken by humans to avoid known habitats of sea nettles. Read more: http://www.jellyfishfacts.net/sea-nettle...