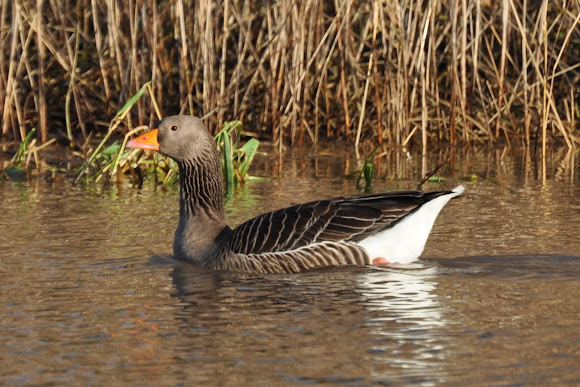 From the RSPB: The ancestor of most domestic geese, the greylag is the largest and bulkiest of the wild geese native to the UK and Europe. In many parts of the UK it has been re-established by releasing birds in suitable areas, but the resulting flocks (often mixed with Canada geese) found around gravel pits, lakes and reservoirs all year round in southern Britain tend to be semi-tame and uninspiring. The native birds and wintering flocks found in Scotland retain the special appeal of truly wild geese.

From the RSPB: Wild ones, are found mostly north of the Solway and can be seen at RSPB nature reserves such as Mersehead (Dumfries & Galloway), Vane Farm (Fife) and Loch of Strathbeg (Grampian) from September to April. Wild breeding greylags can be found at Forsinard (Caithnes & Sutherland).

Very similar to the Pink footed or the white fronted goose. This one appeared alone on the pond after two days of high speed winds.