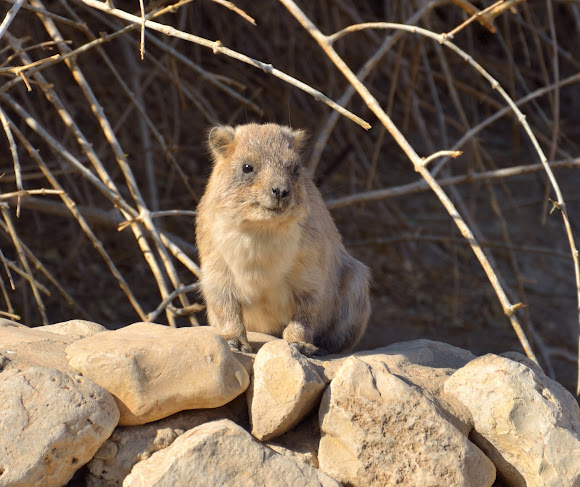 The Rock Hyrax (Procavia capensis), or Cape Hyrax, is one of the four living species of the order Hyracoidea, and the only living species in the genus Procavia. Like all hyraxes, it is a medium-sized (~4 kg) terrestrial mammal, superficially resembling a guinea pig with short ears and tail. The closest living relatives to hyraxes are the modern day elephants and sirenians. The rock hyrax is found across Africa and the Middle East, in habitats with rock crevices in which to escape from predators. Hyraxes typically live in groups of 10–80 animals, and forage as a group. Their most striking behaviour is the use of sentries: one or more animals take up position on a vantage point and issue alarm calls on the approach of predators. The rock hyrax has incomplete thermoregulation, and is most active in the morning and evening, although their activity pattern varies substantially with season and climate. Over most of its range, the rock hyrax is not endangered, and in some areas is considered a minor pest. In Ethiopia, Israel and Jordan, they have been shown to be a reservoir of the leishmaniasis parasite.