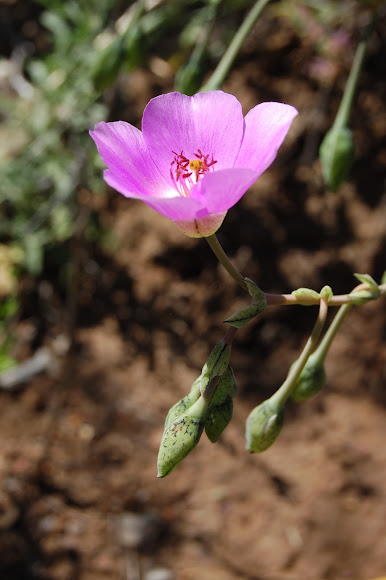 Family: Portulacaceae
Common name: Rock Purlsane
Cistanthe grandiflora 'Jazz Time' (Rock Purslane) - A succulent plant, native to Chile, that forms mounds to 1 foot tall by 3 feet wide of fleshy obovate gray-green leaves to 4 to 6 inches long. In spring through fall, rising on delicate 2-3 foot tall stems, emerge the 2 inch wide purple flowers that each last only one day. This plant has long been known as Calandrinia grandiflora but recently the name Cistanthe has been reinstated for many New World species formerly placed in the genera Calandrinia.

Plant in full sun to part shade in a well-drained soil with only occasional irrigation. It is hardy to USDA Zone 8 (10-20° F) and is sometimes planted as an annual in cooler climates.
The species is a widespread polymorphic species found in north central to central Chile.

The name for the genus is presumed to have originated from the genus name Cistus and the Greek word 'anthos' meaning "flower" in reference to the flowers resembling those of the Rockrose (Cistus sp.) with the specific epithet referring to its large flowers.
In Dr. Donna Ford-Werntz and Iris Perata's treatment of the Portulaceae in The Illustrated Handbook of Succulent Plants: Dicotyledons Springer Press 2002 Calandrinia spectabilis is a name noted as having unresolved application but referred to the genus Cistanthe.
description from: http://www.smgrowers.com/products/plants...