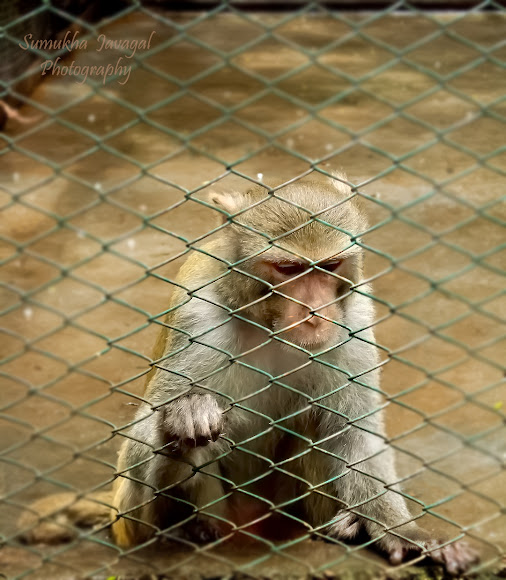 The Rhesus macaque is brown or grey in color and has a pink face, which is bereft of fur. Its tail is of medium length and averages between 20.7 and 22.9 cm (8.1 and 9.0 in). Adult males measure approximately 53 cm (21 in) on average and weigh about 7.7 kg (17 lb). Females are smaller, averaging 47 cm (19 in) in length and 5.3 kg (12 lb) in weight. Rhesus macaques have on average 50 vertebrae. Their intermembral index (ratio of arms to legs) is 89%. They have dorsal scapula and a wide rib cage. The Rhesus macaque has 32 teeth with a dental formula of 2.1.2.3/2.1.2.3 and bilophodont molars. The upper molars have four cusps: paracone, metacone, protocone and hypocone. The lower molars also have four cusps: metaconid, protoconid, hypoconid and entoconid.

Rhesus macaques are native to northern India, Bangladesh, Pakistan, Nepal, Burma, Thailand, Afghanistan, Vietnam, southern China, and some neighboring areas. The Rhesus monkey has the widest geographic ranges of any nonhuman primate, occupying a great diversity of altitudes throughout Central, South and Southeast Asia. Inhabiting arid, open areas, Rhesus macaques may be found in grasslands, woodlands and in mountainous regions up to 2,500 m (8,200 ft) in elevation. They are regular swimmers. Babies as young as a few days old can swim, and adults are known to swim over a half mile between islands, but are often found drowned in small groups where their drinking waters lie. Rhesus macaques are noted for their tendency to move from rural to urban areas, coming to rely on handouts or refuse from humans. The southern and the northern distributional limits for rhesus and bonnet macaques, respectively, currently run parallel to each other in the western part of the country, are separated by a large gap in central India, and converge on the eastern coast of the peninsula to form a distribution overlap zone. This overlap region is characterized by the presence of mixed-species troops, with pure troops of both species sometimes occurring even in close proximity to one another. The range extension of rhesus macaque – a natural process in some areas and a direct consequence of introduction by humans in other regions – poses grave implications for the endemic and declining populations of bonnet macaques in southern India.

Ecology and behavior: Rhesus macaques are diurnal animals, and both arboreal and terrestrial. They are quadrupedal and, when on the ground, they walk digitigrade and plantigrade. They are mostly herbivorous feeding on mainly fruit, but also eating seeds, roots, buds, bark, and cereals. It has been estimated that they consume around 99 different plant species in 46 families. During the monsoon season, they get much of their water from ripe and succulent fruit. Macaque living far from water sources lick dewdrops from leaves and drink rain water accumulated in tree hollows. They have also been observed eating termites, grasshoppers, ants and beetles. When food is abundant, they are distributed in patches and forage throughout the day in their home range. They drink water when foraging and gather around streams and rivers. Rhesus macaques have specialized pouch-like cheeks, allowing them to temporarily hoard their food. In psychological research, Rhesus macaques have demonstrated a variety of complex cognitive abilities, including the ability to make same-different judgments, understand simple rules, and monitor their own mental states. They have even been shown to demonstrate self-agency, an important type of self-awareness. Group structure: Like other macaques, Rhesus troops comprise a mixture of 20–200 males and females. Females may outnumber the males by a ratio of 4:1. Males and females both have separate hierarchies. Females have highly stable matrilineal hierarchies in which a female’s rank is dependent on the rank of her mother. In addition, a single group may have multiple matrilineal lines that exist in a hierarchy, and a female outranks any unrelated females that rank lower than her mother. Rhesus macaques are unusual in that the youngest females tend to outrank their older sisters. This is likely because young females are more fit and fertile. Mothers seem to prevent the older daughters from forming coalitions against her. The youngest daughter is the most dependent on the mother, and would have nothing to gain from helping her siblings in overthrowing their mother. Since each daughter had a high rank in their early years, rebelling against their mother is discouraged. Juvenile male macaques also exist in matrilineal lines but once they reach 4–5 years of age they are driven out of their natal groups by the dominant male. Thus adult males gain dominance by age and experience. In the group, macaques position themselves based on rank. The Central Male Sub-group contains the 2-3 oldest and most dominant males who are co-dominant, along with females, their infants and juveniles. This sub-group occupies the center of the group and determines the movements, foraging and other routines. The females of this sub-group are also the most dominant of the entire group. The farther to the periphery a sub-group is, the less dominant it is. Sub-groups on the periphery of the central group are run by one dominant male who ranks lower than the central males, and who maintain order in the group and communicate messages between the central and peripheral males. A sub-group of subordinate, often sub-adult males occupy the very edge of the groups and have the responsibility of communicating with other macaque groups and make alarm calls. Communication: Rhesus macaques interact using a variety of facial expressive, vocalizations and body postures, and gestures. Perhaps the most common facial expression the macaque makes is the "silent bared teeth" face. This is made between individuals of different social rank with the lower rank one giving the expression to its superior. A less dominant individual will also make a "fear grimace" accompanied by a scream to appease or redirect aggression. Another submissive behavior is the "present rump" where an individual raises its tail and exposes its genitals to the dominant one. A dominant individual will threaten another individual standing quadrupedally making a silent "open mouth stare" accompanied by the tail sticking straight. During movements, macaques will make "coos" and "grunts". These are also made during affiliative interactions and approaches before grooming. When they find rare food of high-quality, macaque will emit "Warbles," "harmonic arches," or "chirps." When in threatening situations, macaques will emit a single loud, high-pitched sounds called a "shrill bark".[26] "Screeches," "screams," "squeaks," "pant-threats," "growls," and "barks" are when during aggressive interactions. Infants make "geckers" during weaning conflicts. Reproduction: Adult male macaques try to maximize their reproductive success by entering into consort pairs with females, both in and outside the breeding period. Females prefer to mate with males that will increase the survival of their young. Thus a consort male provides resources for his female and protects her from predators. Larger, more dominant males are more likely to provide for the females. The breeding period can last up to 11 days, and a female usually mates with four males during that time. Male rhesus macaques have not been observed to fight for access to sexually receptive females, although they suffer more wounds during the mating season. Female macaques first breed when they are four years old, and reach menopause at around 25 years of age. Male macaques generally play no role in raising the young but do have peaceful relationships with the offspring of their consort pairs. Mothers with one or more immature daughters in addition to their infants are in contact with their infants less than those with no older immature daughters. This is because the mothers may pass the parenting responsibilities to her daughters. High-ranking mothers with older immature daughters also reject their infants significantly more than those without older daughters, and tend to begin mating earlier in the mating season than expected based on their dates of parturition the preceding birth season. Infants farther from the center of the groups are more vulnerable to infanticide from outside groups. Some mothers abuse their infants which is believed to be the result of controlling parenting styles.

Yes Ashish. I too felt very sad after seeing this.

Oh this poor guy thinking of getting rid of this cage.... Thats why I avoid to visit zoo since long ago... can not see into their eyes..... =(

@JullaKroner- He was so furious..! But looks too sad.. He must be feeling like "Jailed abroad"..

He looks so tired ..