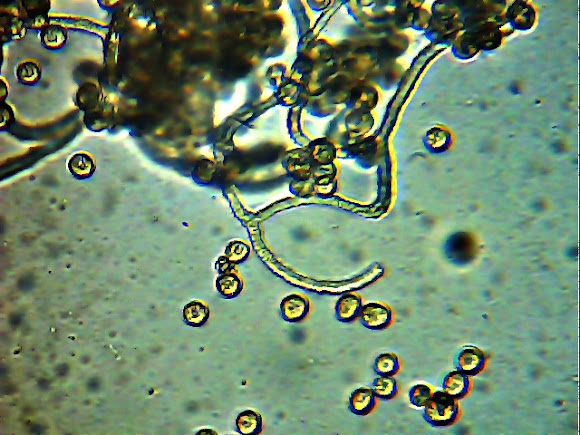 Slime mold or mould is a broad term describing protists that use spores to reproduce. Slime molds were formerly classified as fungi, but are no longer considered part of this kingdom. Their common name refers to part of some of these organisms' life cycles where they can appear as gelatinous "slime". This is mostly seen with the myxomycetes, which are the only macroscopic slime molds. Slime molds have been found all over the world and feed on microorganisms that live in any type of dead plant material. For this reason, these organisms are usually found in soil, lawns, and on the forest floor, commonly on deciduous logs. However, in tropical areas they are also common on inflorescences, fruits and in aerial situations (e.g., in the canopy of trees) and also grow in air conditioners, especially when the drain is blocked. In urban areas, they are found on mulch or even in the leaf mold in gutters. One of the most commonly encountered slime molds is the yellow Physarum polycephalum, found both in nature in forests in temperate zones, as well as in classrooms and laboratories. Most slime molds are smaller than a few centimeters, but some species may reach sizes of up to several square meters and masses of up to 30 grams. Many have striking colours such as yellow, brown and white ( http://en.wikipedia.org/wiki/Slime_mold ) { the original spotting ---> ( http://www.projectnoah.org/spottings/834... ) } ---- no idea- how much the usb-microscope-cam magnified (if it does), i couldn't find product-data for this camera. Because of the camera,i have to remove the "barlow-lense" and the "eyepiece" ( 5x and 16x magnifying). When the camera does not increase, just purely recorded, the come my microscope-pictures with magnifications between: 4x - 10x - 40x (mostly 40x and then 10x)-- i haven't figured out yet, how to convert the magnification at my microscope to understandable size-numbers

yes agrybee, i agree completly, the first new one, should be "eukaryotes" (slime molds,algae,sea nettles/jelly-fish...) . that is one big "domain" missing here. ( http://en.wikipedia.org/wiki/Eukaryota ). I'm not the only one, who missed/needs/searched, such a category.