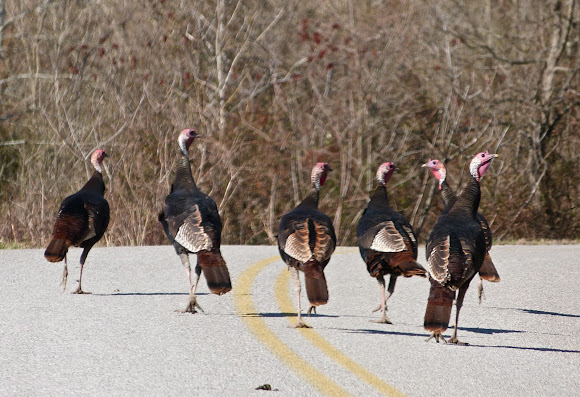 Adult wild turkeys have long reddish-yellow to grayish-green legs and a black body. Males, called toms or gobblers, have a large, featherless, reddish head, red throat, and red wattles on the throat and neck. The head has fleshy growths called caruncles. When males are excited, a fleshy flap on the bill expands, and this, the wattles and the bare skin of the head and neck all become engorged with blood, almost concealing the eyes and bill. The long fleshy object over a male's beak is called a snood. When a male turkey is excited, its head turns blue; when ready to fight, it turns red. Each foot has three toes, and males have a spur behind each of their lower legs. Male turkeys have a long, dark, fan-shaped tail and glossy bronze wings. As with many other species of the Galliformes, turkeys exhibit strong sexual dimorphism. The male is substantially larger than the female, and his feathers have areas of red, purple, green, copper, bronze, and gold iridescence. Females, called hens, have feathers that are duller overall, in shades of brown and gray.

This flock of young toms spent 20 minutes wandering aimlessly all over the road in front of our car before finally taking flight!

Thanks Seema - it was, though they seemed absolutely clueless as to where they were going!

Nice to see the flock parading down the street

They finally took off & unfortunately I missed the shot as I was clambering through a ditch trying to get a clear shot of another few dozen turkeys in a field nearby - I think it must have been some kind of turkey convention!

Looks like a wild turkey weekend hiking excursion. Where did the go to?

Maybe they are just allowing plenty of time to head to the hills! :)

a little early for thanksgiving parade

This reminds me of the Beatles Abbey Road album cover :D

Janson, maybe they feel it's safe to be out & about again now that Thanksgiving & Christmas have passed!
Thanks Liam!