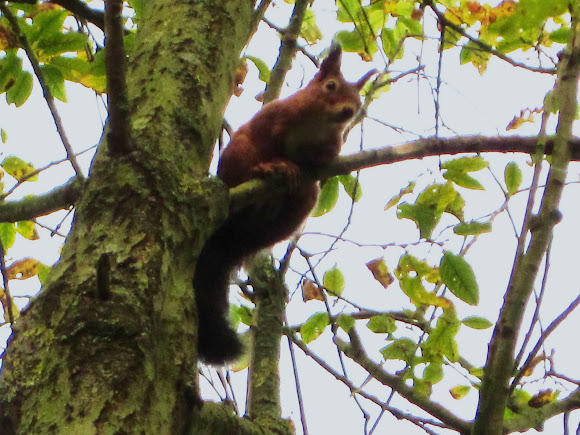 there's a little story: They FOOLED me!! I was on the way to a special spotting location, when i noticed something on the right side in front of me. When i had located it, it seemed to be a squirrel. It just jumped from the ground (were it was probably foraging), onto the lower part of the standing tree. ----That was the moment i rummaged my camera out of the bag. While adjusting the camera, i carefully took some step to get a better position. (i was on the path, it was on the tree, between us : bare bushes). Meantime climbed it the tree above, i almost doesn't noticed that, because it did it: behind the tree, with the piece of wood always between us. (sly move)---Now, the camera was ready, and i saw only 2 claws and a bit of its back . So i tried to go around the tree, to look from the side on it. NO WAY: the squirrel crawled after the tree with me. when i go right: it crawl further left, when i tried it otherway around, it does the same, so i got only picture, from a squirrel behind a tree [picture 2+3 ].------ I thought: try the patience-way and positioned me by another tree, with the camera ready and tried: sitting still ! Also NO WAY: It appeared another squirrel (seemed smaller and brighter color), right side of me, after a fence. It sat quiet on a branch [picture 4], then i heard squeeking from the first #1 squirrel, then the second #2 began to beat the branch with the tail [picture 5]. (i was fazinated by this "interaction"). But i took a picture. I was busy with the #2, and heard rustling, from the direction of the #1: it was climb just a little bit higher [picture 6 ], on a better flight-way. There i get the best picture from #1. While i was again occupied with #1, sitting [picture 1] on its flight-way, MAKING a show, heard i again something from my right (#2), it was jumped off of the branch and ran after the fence to a little still green bush under the tree from #1. I just saw #2 tail disappearing. Looking back above #1 was also diappeared from the tree.------- Therefore they have fooled me, They have used each other to distract me, while the other part moves out of the danger. While in danger, they try to stay out of sight, by crawling behind the tree. always with the wood between him and the "danger". Nice move

The red squirrel is found in both coniferous forest and temperate broadleaf woodlands. The squirrel makes a drey (nest) out of twigs in a branch-fork, forming a domed structure about 25 to 30 cm in diameter. This is lined with moss, leaves, grass and bark. Tree hollows and woodpecker holes are also used. The red squirrel is a solitary animal and is shy and reluctant to share food with others. However, outside the breeding season and particularly in winter, several red squirrels may share a drey to keep warm. Social organization is based on dominance hierarchies within and between sexes; although males are not necessarily dominant to females, the dominant animals tend to be larger and older than subordinate animals, and dominant males tend to have larger home ranges than subordinate males or females. ------The red squirrel eats mostly the seeds of trees, neatly stripping conifer cones to get at the seeds within. Fungi, nuts (especially hazelnuts but also beech and chestnuts), berries, young shoots, and bird eggs are occasionally eaten. Often the bark of trees is removed to allow access to sap. Between 60% and 80% of its active period may be spent foraging and feeding. Excess food is put into caches, either buried or in nooks or holes in trees, and eaten when food is scarce. Although the red squirrel remembers where it created caches at a better-than-chance level, its spatial memory is substantially less accurate and durable than that of grey squirrel; it therefore will often have to search for them when in need, and many caches are never found again. No territories are maintained, and the feeding areas of individuals overlap considerably. -------------Red squirrel----------------- The active period for the red squirrel is in the morning and in the late afternoon and evening. It often rests in its nest in the middle of the day, avoiding the heat and the high visibility to birds of prey that are dangers during these hours. During the winter, this mid-day rest is often much more brief, or absent entirely, although harsh weather may cause the animal to stay in its nest for days at a time. ----Arboreal predators include small mammals including the pine marten, wild cats, and the stoat, which preys on nestlings; birds, including owls and raptors such as the goshawk and buzzards, may also take the red squirrel. The red fox, cats and dogs can prey upon the red squirrel when it is on the ground. Humans influence the population size and mortality of the red squirrel by destroying or altering habitats, by causing road casualties, and by controlling populations of grey squirrels.

The red squirrel has a typical head-and-body length of 19 to 23 cm (7.5 to 9 in), a tail length of 15 to 20 cm (5.9 to 7.9 in) and a mass of 250 to 340 g (8.8 to 12 oz). It is not sexually dimorphic, as males and females are the same size. The red squirrel is somewhat smaller than the eastern grey squirrel which has a head-and-body length of 25 to 30 cm (9.5 to 12 in) and weighs between 400 and 800 g (14 oz to 1.8 lb). It is thought that the long tail helps the squirrel to balance and steer when jumping from tree to tree and running along branches and may keep the animal warm during sleep. -----The coat of the red squirrel varies in colour with time of year and location. There are several different coat colour morphs ranging from black to red. Red coats are most common in Great Britain; in other parts of Europe and Asia different coat colours co-exist within populations, much like hair colour in some human populations. The underside of the squirrel is always white-cream in colour. The red squirrel sheds its coat twice a year, switching from a thinner summer coat to a thicker, darker winter coat with noticeably larger ear-tufts (a prominent distinguishing feature of this species) between August and November. A lighter, redder overall coat colour, along with the larger ear-tufts (in adults) and much smaller size, distinguish the Eurasian red squirrel from the American eastern grey squirrel. ----The red squirrel, like most tree squirrels, has sharp, curved claws to enable it to climb and descend broad tree trunks, thin branches and even house walls. Its strong hind legs enable it to leap gaps between trees.The red squirrel also has the ability to swim

sly squirrels FOOLING spotter !!! It changed the way i think of them. Generelly i think animals are more intelligent then we think, we just don't understand their way of thinking. But the move of those 2, were brilliant, a different level.