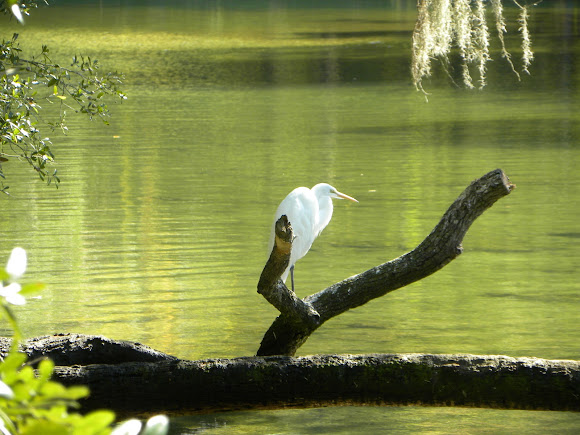 A large white heron, the Great Egret is found across much of the world, from southern Canada to Argentina, and in Europe, Africa, Asia, and Australia. It's the largest egret in the Old World, and thus has garnered the name Great White Egret. In the New World, however, the white form of the Great Blue Heron is larger. In the United States, the Great Egret used to be called the American Egret large white heron.

Nests in colonies with other species, in shrubs and trees over water, and on islands. Feeds in variety of wetlands, including marshes, swamps, streams, rivers, ponds, lakes, tide flats, canals, and flooded fields.

Thank You Emma!! I think these birds are friendly too. Do you have a pet snowy egret?

Thanks for the advice ebsharrett1950.
I agree with you on the rule of thirds. I did look at this photo cropped. I decided I like it in the middle. I also do some abstract photography so sometimes, I break the rules. I was a art student for many years so, I sometimes look at things in a different way.I liked your website. Your landscapes are awesome!! Oh, the out of focus photo is due to my auto-focus Nikon. What camera do you use??

I find the egrets and herons very friendly. We have a snowy egret and it is so cute!

Pyoung very elegant bird. Such a beauty! thanks for sharing! Loved the video and the picture! Great work pyoung!

This is a nice photograph, but i am not crazy about the egret being centered in the frame or the soft focus on the egret. Was the focal effect part of the class outlines? The composition is okay but if it were cropped to the left of the branch and the egret would it wouold appear more appealing and conform to the rule of thirds.

What a Beauty!
Lovely photo!

Thank you, very much!!