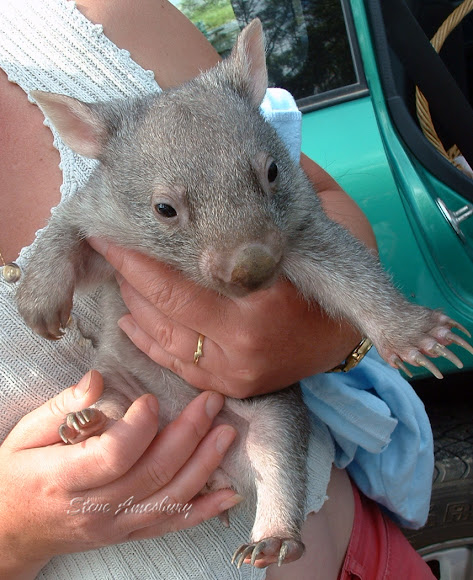 The Common Wombat (also known as the coarse-haired or forest Wombat) is an Australian marsupial, one of three species of wombats. Fully grown adults can reach up to 130cm, and weigh as much as 40kg. The first (of three) photos shows a young (rescued) wombat.

Widespread in the cooler a parts of southern and eastern Australia, and in mountain districts as far north as the south of Queensland. Numbers are in decline, but it is not listed as a threatened species (yet)/

The first photo was taken of a juvenile in 2004 after its mother was killed on the road. The second pic was taken of a large adult, who took up residence in someone's store-room (much more comfy than a burrow). The third pic (12 Oct 2008) shows the same adult after being "evicted" from his new lodgings. All pics taken in course of rescue activity (see www.wildlife-rescue.org.au).