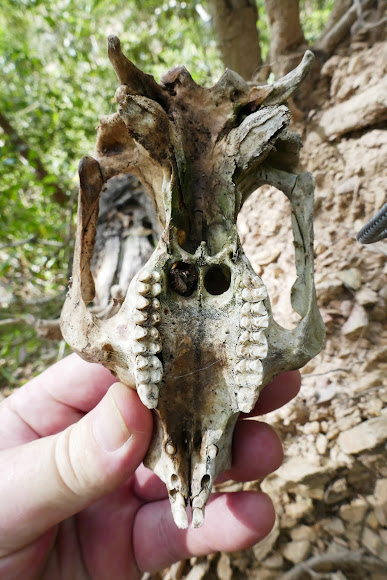 I found what is most certainly the skull of a koala. It is an arboreal herbivorous marsupial native to Australia, and is the only extant representative of the family Phascolarctidae. The closest living relative is the wombat. I've done dozens of image searches of native animal skulls, but they keep pointing me back to the koala - this is clearly not the skull of an introduced species, nor a carnivore. Large eye and nasal cavities, large incisors, five molars each side, and the size is just about right. I was unable to locate the mandible. Needless to say, I hadn't a clue what I had found at the time and my initial thought was it belonged to a brushtail possum, but that wasn't to be the case. I can also see the family resemblance to the wombat, having now done comparisons. The wombat skull is quite similar in shape and size, although much heavier in appearance, and with larger, broader incisors. However, it was the smallest teeth that helped me ID this spotting, shown clearly in photos 4 and 5 - the canines, nestled between the incisors and premolars. The distance between the incisors, canines and molars, called the 'diastema' (plural diastemata), also became obvious as it's usually quite large in herbivores. Finally, note the 'three' pairs of incisors lined up in a row (of which three individual teeth are actually missing in this spotting), again shown clearly in photos 4 and 5, and also illustrated in the following link - https://www.savethekoala.com/sites/savet...

Spotted along the Gold Creek walking trail at Gold Creek Reservoir, which lies just to the west of Brisbane. Freshwater lake, and dense native bushland vegetation of dry eucalypt forests and subtropical rainforests.

I'm constantly looking for koalas when I'm out hiking. It's hard enough finding a living one, so what are the odds of finding a koala skull? It was just lying a short distance from the track in the undergrowth. I don't even know what made me look, but I'm so glad I did. I left the skull behind on the trail as it is illegal to remove any item from a national park, state forest or nature reserve in Australia. However, once I had a clearer idea of what I had found, I returned to the area two weeks later to locate it once again, but to no avail. I rested it on a tree stump so other hikers could also see it, but I think it may have been taken. I just wanted some clearer photos. Never mind. PS: If you click on the reference link, it displays a photo of a koala skull. Just beneath the photo there is a tab which says "view/download original image." Click on that, and it brings up a full-size image with amazing detail. PPS: A great koala link: Australian Koala Foundation - https://www.savethekoala.com/ Everything you could ever want to know. It even shows a skull.

Thanks, Leuba, Felix, and everyone. Greatly appreciated.

Cheers, Daniele and Mark. I thought I must have had misidentified this spotting. Thylarctos plummetus, indeed ;) It was an April Fool's joke initially, but being classic Australian humour, the museum kept the page, and that map is a classic. All that aside, thanks to everyone for your congrats, and thanks for this SOTW. Much appreciated.

Goodness.... thanks Mark. Neil, please kindly change the scientific name to Thylarctos plummetus. I'll now have to change all social media announcements ;-)
(you've got to love the distribution map on the Australian Museum reference ;-) )

Super spotting Neal,great detail photos,like a report :-) super interesting notes,very educativ spotting,so congrats on the well deserved SOTD and thanks for your enthusiasm and for you great work in Project Noah

It's been another tight round of voting this week, and as you've noticed Neil we've nominated a pretty varied selection of spottings. Your enthusiastic and and rigorous koala skull investigation won the vote! Congratulations, as you continue to bring the best out of Project Noah :-)

"Follow our member Neil Ross in a thrilling investigation with our Spotting of the Week, and learn all about the dentition of koalas!""

Thanks, drstephen. And to you as well for your Hoopoe spotting. That's pretty awesome. Leuba Ridgway's Red Seaweed spotting has been nominated too. You'd be hard-pressed to find three more different spottings. Fingers crossed to everyone nominated.

Congratulations on your nomination for SOTW.

Thanks, Rob. They are very interesting. "Use it or lose it" springs to mind. Wombats have completely lost their canines, so why haven't koalas? Perhaps they still serve some purpose, or given time, they completely disappear? A mystery that just needs time.

Fascinating spotting Neil. I have seen plenty of possum skulls but this is obviously different. Vestigel canines are interesting.

Those large incisors surprised me too. The wombats are similar, just much broader. It was the incisors that made me think at first I had found a possum skull. However, those tiny canine teeth you can see in the fourth photo changed my mind completely. It was then that I realised I was dealing with something totally different. Pity I couldn't locate the mandible.

I was surprised at the incisors, too - reminded me of an American beaver!

I am amazed at the size of the incisors. Good spotting Neil. Pity you didn't get to see it again.

Oh wow. Thanks, Ashley. I appreciate the nomination.

Thanks, Leanne. I've been in several koala zones these past few weeks, and have been scanning the trees above as much as the track ahead! They're playing hard-to-get, but I am persistent. I'll make do with the skull cos that's pretty unique, but they'll slip up, and I'll be there.

Great find Neil. Really interesting. I hope you find that living one, but I really love what you find in the mean time.