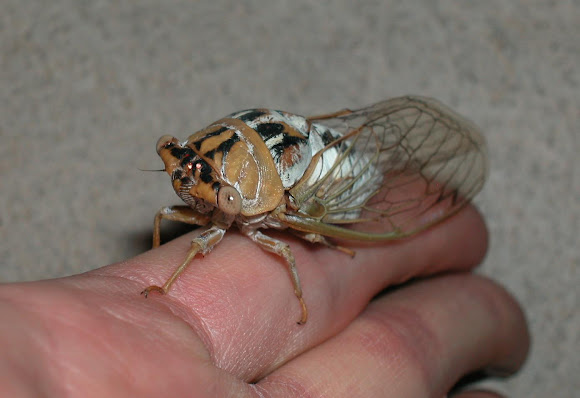 1) ABDOMEN: T. dealbatus exhibits greater pruinosity (white powdered wax) than seen in pronotalis. The pruinosity is usually arranged in "dotted stripes" along the sides of the abdomen and dorsal abdominal midline (rare in pronotalis). 2) THORAX: T. dealbatus exhibits greater pruinosity on the thorax (esp. the mesonotum) Often similar in appearance and confused with "The dorsatus Group" Tibicen dorsatus (Say 1825), "Grand Western Annual Cicada" or "Bush Cicada" Tibicen tremulus (nov. sp.), a.k.a. "Bush Cicada" 3) T. dealbatus is usually a bit more compact and has a slightly narrower head than seen in pronotalis 4) COLORATION: Variable in both taxa and not entirely diagnostic!, - tendencies - when T. dealbatus is green, it is typically a duller "pea green" (often more of a ~lime green in pronotalis) - when tan, it is typically more of a sandy-brownish tan as opposed to a ochreous yellow or taupe (green-tan) seen in pronotalis. 5) DISTRIBUTION: Geographic distribution of pronotalis and dealbatus and how they may relate. To date, neither pronotalis nor dealbatus seem to be sympatric in their "pure" form. Although there is evidence to suggest genetic exchange and blending among adjacent populations (pronotalis x dealbatus), it is unlikely to find both taxa in their "pure forms" coexisting side by side. 6) WINGS: The costal margins of the forewings - heavy veins of the leading wing edge - are usually bowed or noticeably arciform as in pronotalis (more so than seen in several similar species). Like pronotalis, the heavily infuscated (i.e. smoky black-grey) "Z" visible towards the ends of the forewings, and typical of most Tibicen species, is usually poorly developed to absent with only the cross veins being evident (i.e. The radial and radiomedial cross veins of tegmina, forewing, NOT heavily infuscated or darkened.). 7) CALL: The call of dealbatus is identical to that of pronotalis and may be described as a deep rhythmic "Yeee-Yeee-Yeee-....." with a subtle underlying rumble ..."broom-broom-broom-...." (difficult to vocally immulate or "spell out"). This species calls from late afternoon 'til well after sunset. (information from BugGuide)

Found on the side of a motel

dealbata is Latin for "whitewashed, whitened"