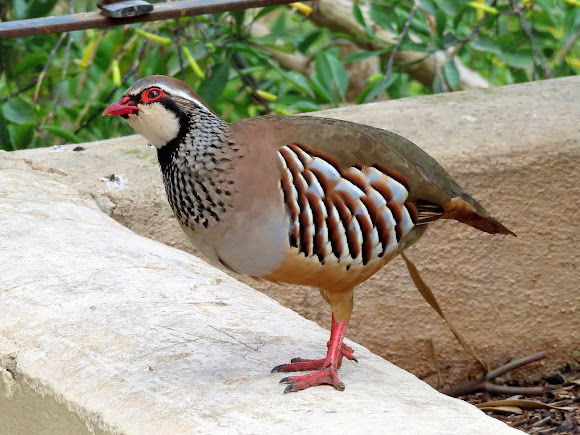 It is a plump bird of medium size. Both sexes are the same. It has an orange belly and striking flanks with white, black, brown and gray bars; bare and strong legs; white throat and black-speckled chest; grayish brown back; red legs, bill and eye ring. Chickens and juveniles show brown tones and triptych designs. It is a species of terrestrial habits and a good walker, which usually moves on foot. However, the flight is fast and direct, alternating strong wingbeats with glides in which the orange edges of the tail stand out.

This partridge breeds naturally in southwestern Europe (France, Spain, Portugal and Italy). I found this specimen next to some very extensive gardens that exist in the bed of an old river, now diverted to avoid flooding in the city, Los Jardines del Río Turia. When I got home I checked the photos to see if it was female or male, as I had found out that males are distinguished by having a spur next to the leg, as is the case with this spotting. I discovered that it had a red plastic ring, very discolored. I was concerned if he had escaped from some bird protection and recovery center. I called by phone and they asked me if it was in good condition and I confirmed that it was. Then they answered me that the birds that are in freedom do not catch them, since they only look for and locate the sick for their recovery.. I really liked this answer, because now the partridge will be 'at its own pace'.

My video of Red-legged partridge: https://youtu.be/YINUal0iuks

Beauty - I would also like to invite this (and all others feathery spottings from your nature journal) to the Birds of Europe mission here https://www.projectnoah.org/missions/239...

eulalia rubio a year ago

Thank you so much.

Thanks for sharing your pictures are so beautiful and we like the bird.