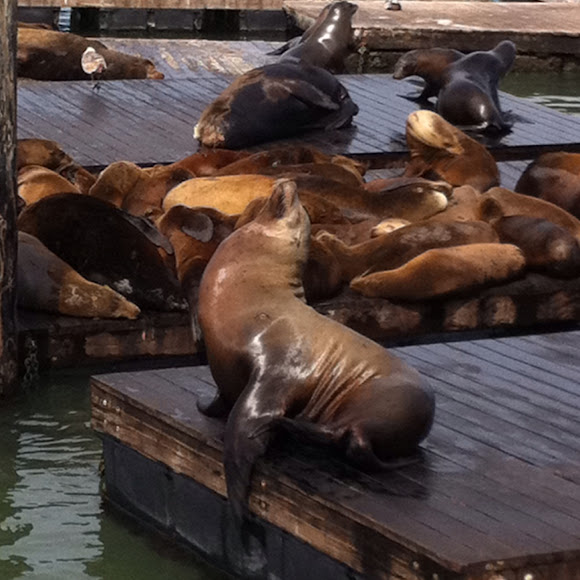 California sea lion males grow to 850 lbs and 2.4 meters (8 ft) long, while females are significantly smaller, at 220 lbs and 2 meters (6.5 ft) long. They have pointed muzzles, making them rather dog-like. Males grow a large crest of bone on the top of their heads as they reach sexual maturity, and this gives the animal its generic name (loph is "forehead" and za- is an emphatic; Zalophus californianus means "Californian big-head"). They also have manes, although they are not as well developed as the manes of adult male South American or Steller sea lions. Females are lighter in color than the males, and pups are born dark, but lighten when they are several months old. When it is dry, the skin is a purple color. A sea lion's average lifespan is 17 years in the wild, and longer in captivity. By sealing their noses shut, they are able to stay underwater for up to 15 minutes.

California sea lions prefer to breed on sandy beaches. They usually stay no more than 10 miles out to sea.[8] On warm days, they stay close to the water's edge. At night or on cool days, the sea lions will move inland or up coastal slopes. Outside of the breeding season, they will often gather at marinas and wharves, and may even be seen on navigational buoys. Sea lions living around islands are less vulnerable to predation than coastal ones.[9] The sea lion's major predators are killer whales and white sharks.[9] California sea lions can also live in fresh water for periods of time. They feed on Pacific salmon in front of Bonneville Dam, 146.1 river miles from the Pacific Ocean. Historically, sea lions hunted salmon in the Columbia River as far as The Dalles and Celilo Falls, 200 miles (320 km) from the sea, as remarked upon by people such as George Simpson in 1841[citation needed]. In 2004, a healthy sea lion was found sitting on a road in Merced County, California, almost a hundred miles upstream from San Francisco Bay and half a mile from the San Joaquin River.

California Sea Lions have been always present in San Francisco Bay. They started to haul out on docks of Pier 39 in September 1989. Before that they mostly used Seal Rock for that purpose. Ever since September 1989 the number of sea lions on Seal Rock has been steadily decreasing, while their number on Pier 39 has generally increased. Some people speculate that sea lions moved to docks because of the 1989 Loma Prieta earthquake, but the earthquake occurred months after the first sea lions had arrived at Pier 39. It is likely that the sea lions feel safer inside the Bay. Although the reason for their migration to the pier is unclear, the refurbishing of the docks in September 1989 required the removal of all boats from that area, leaving large open spaces for the sea lions to move into. Once the project was completed, boat owners returned, but did their best to navigate around the sea lions; no efforts were made to encourage the new guests to leave. By the end of that year, less than a dozen sea lions frequented the docks at Pier 39.[2] By January 1990, their numbers had increased to 150 animals. Owners of the 11 boats docked there began to complain about having to avoid the animals who can weigh up to half a ton, and odor and noise complaints began to pour in. Press releases caught national attention, and the sea lions began to attract tourists. Advice from The Marine Mammal Center was to abandon the docks to the animals, and to relocate the boats elsewhere.[2] Although fluctuations in the number of sea lions at Pier 39 are dramatic, as many as 1,701 (Thanksgiving Week, 2009) have been officially reported at one time, many of whom are recognizable to researchers and others, and some of whom have been unofficially named. Volunteers and staff at The Marine Mammal Store and Interpretive Center monitor the sea lion population each day, and educational information is provided to tourists who visit from around the world. Scientists continue to collect information there, adding to knowledge about sea lion health, dietary habits, and behavior.[2] In November 2009 the more than 1,701 (Thanksgivng Week, 2009) sea lions that had lived at the pier began to leave, and by late December 2009 nearly all were gone; a similar flux in population occurs annually, with the animals returning in the spring. Although the reason for their seasonal appearance and departure is not known for certain, according to Jeff Boehm, executive director of the Marine Mammal Center in Sausalito, "Most likely, they left chasing a food source," anchovies and sardines.[3] A handful of sea lions did return in February, and by late May several hundred could once again be seen on Pier 39. It remains unknown exactly where they went and why. However, in December 2009, nearly 4,000 sea lions that were identified as members of the California sub-species were seen outside Oregon's Sea Lion Caves, which meant that they were likely the sea lions from Pier 39.

Moved to the Mammals category :-)