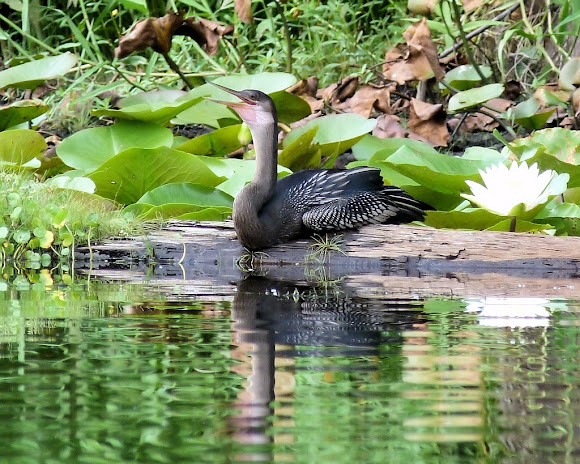 The Anhinga lives in shallow, slow-moving, sheltered waters and uses nearby perches and banks for drying and sunning. It's rarely found out of freshwater except during severe droughts. Generally not found in extensive areas of open water, though it may nest on edges of open bays and lakes. Breeds near freshwater, often in association with other waterbirds such as herons, egrets, ibises, storks, and cormorants. The Anhinga may also breed in saltwater colonies and feed in fresh water. http://www.allaboutbirds.org/guide/anhin...

Also referred to as the Water Turkey and/ or Snakebird. The reason they got the name snakebird is their necks appear to be snakes coming up out of the water as they rise from their dives. This was taken on the Aucilla river from a little rubber boat. It isn't often you see them sitting at the waters edge like this.

Thank you both kindly

I was going to say, I have never seen one sitting like this, I usually see them wings spread, drying their wings! Great photo and information, Mary! Thanks for posting to Florida's Flora & Fauna!