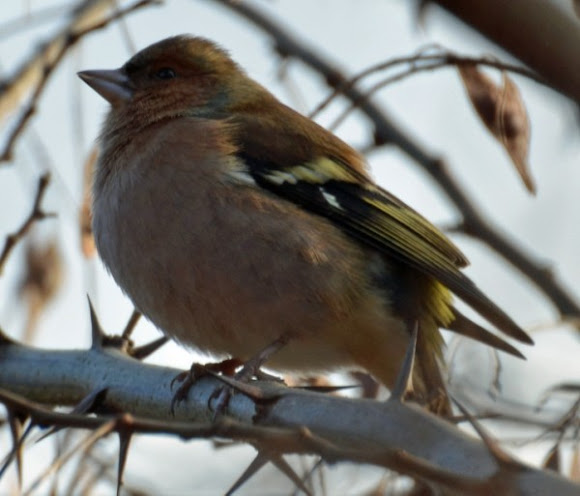 The male Chaffinch is distinctively coloured, especially in spring when the dull outer edges of his feathers wear away to reveal the striking blue head and pink breast. In all plumages though, Chaffinches are easily told by their unique combination of two broad white wing bars and obvious white outer tail feathers.

This bird is widespread and very familiar throughout Europe. It is the most common finch in western Europe, and the second most common bird in the British Isles. Its range extends into western Asia, northwestern Africa, and Macaronesia, where it has many distinctive island forms. In the Canary Islands of Tenerife and Gran Canaria, the Chaffinch has colonised twice, giving rise to the endemic species known as the Blue Chaffinch and a distinctive subspecies. In each of the Azores, in Madeira, and in the rest of the Canaries there is a single species on each island. It was introduced from Britain into a number of its overseas territories in the 18th and 19th centuries. In New Zealand it is a common species. In South Africa a very small breeding colony in the suburbs of Constantia, Hout Bay and Camps Bay near Cape Town is the only remnant of one such introduction. It uses a range of habitats, but open woodland is favoured, although it is common in gardens and on farmland.