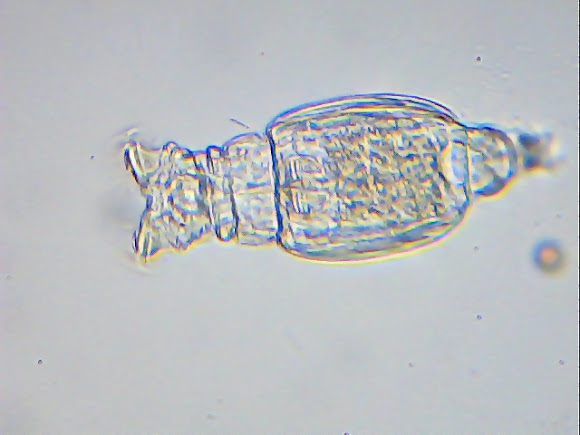 Bdelloidea ( /dɨˈlɔɪdiə/) is a class of rotifers found in fresh water and moist soil. Bdelloids typically have a well-developed corona, divided into two parts, on a retractable head. They may move by swimming or crawling. The latter commonly involves taking alternate steps with the head and tail, as do certain leeches, which gives the group their name (Greek βδελλα or bdella, meaning leech). -------Bdelloids have been of interest to those interested in the evolutionary role of sexual reproduction, because it has disappeared entirely from the group: males are not present within the species, and females reproduce exclusively by parthenogenesis.Each individual has paired gonads. Despite the fact that they have been asexual for millions of years, they have diversified into more than 300 species and are fairly similar to other sexually-reproducting rotifer species

Bdelloids respond to environmental stresses by entering a state of dormancy known as anhydrobiosis. This dormancy form enables the organism to rapidly dehydrate itself. The Bdelloid will remain in this cysted state until optimal environmental conditions re-occur at which point they will rehydrate and become active within hours. Diapause is the ability of the organism to produce offspring in a dormant and unhatched state[citation needed]. Hatching of the young will only occur when conditions are at their most favourable. These forms of dormancy are also known as cryptobiosis or quiescence. -------When these unusual creatures spring from hibernation, they undergo a fascinating and possibly unique genetic process. A study conducted by Matthew Meselson of Harvard University suggests that when bdelloid rotifers recover from suspended animation, they incorporate foreign DNA when patching up their own ruptured cell membranes. Any DNA in proximity to the organisms can be included in the new genome, including semi-digested food. This may be interpreted as an intermediate between true asexual and sexual reproduction. -----Bdelloid rotifers have recently been shown to be extraordinarily resistant to damage from ionizing radiation. The same DNA-preserving adaptations used to survive dormancy are thought to work in this case, and may have also helped the organisms to thrive despite their totally asexual mode of reproduction.

While i was looking through my microscop for some spores of the slime mold i found, i discovered THIS on the slide. Sometimes i come parts of larvae/bugs (legs,hairs or tentacles) across under the microscope, but this time, the parts began to move. This was the first sight of the organism, when i saw this, it was clear, that this isn't a amoebozoa spore. It was many times bigger and had a beating/pumping part as big as few spores. It seems surrounded by an egg ( not hatched). Except of the center, were not much movement.---one seems already hatched (in total noticed i, 3 specimen, 2 eggs; 1 hatched ). It has a spiky end, which seems to be the : foot and rear, The more round end, could be seen as head, he can open/fold in 2 parts. At the end of those 2 parts are bristle-like "hairs", which move fast and filter new food inside. At the center of the organism is something beating: looking like a heart/loung- mix.---it began to move more, at around 0.55seconds (video3), he released something from his rear.---it got more activ, it opens the head/mouth and filtered the water with the hair/lashes-like parts for bacterias, the center is beating/pumping. It seems, that it regenerate enough force to let the spores,2 times its bodylenght away,swirl around---then it lost it patience and began to move fast, running around (maybe digesting walk?!) ------> ( http://www.youtube.com/user/rexalex84/se... )

the german wikipedia goes further than the english. In direction mycology (fungi/amoebozoa) is the germanW better (for me that is) .

Alex, you could tentatively add the order Bdelloidea to your list:
http://en.wikipedia.org/wiki/Bdelloidea
They are found in moist soil.
I won't risk IDying it further down :-)

--Kingdom:Animalia
--(unranked):Protostomia
--(unranked):Spiralia
--(unranked):Platyzoa
--Phylum:Rotifera
sorry p.young, when i understand it so far, right, have i just read otherwise than: opisthokont. At the begin, i also thought, or landed at this direction. I already found it, but try to get some closer to any species-id. thanks

i will try now, to find a beter id, Now i have a direction to go/search. thanks again. For me it was a parasite, he parasited my microscope slide. No seriously, at least: he must come into the microscope-slide via the slime mold fruitbody, but what i read till now, it is a freshwater-organism !!!!!?

You're welcome Alex! The video was very useful.

It looks like a parasite? I just looked at the video! Awesome!

The sighting you take are very interesting. This is good to encourage people to go into science!!

yes thanks danielepralong. i think it is it. The video looks like , what i saw and recorded. THANKS, that was fast. and i were searching for a hour without result.

yes, "bresser usb cam 3.0", i can adapt it at the microscope, its relativ new for me, but i would wish a little bit better quallity-cam. Also is there no scale on it, i can just say,what zoom (4x/10x/40x) i used, but i dont know, if the cam magnified too.

Thats very interesting! How do you take photos of these spores? Is it a camera on the Microscope?