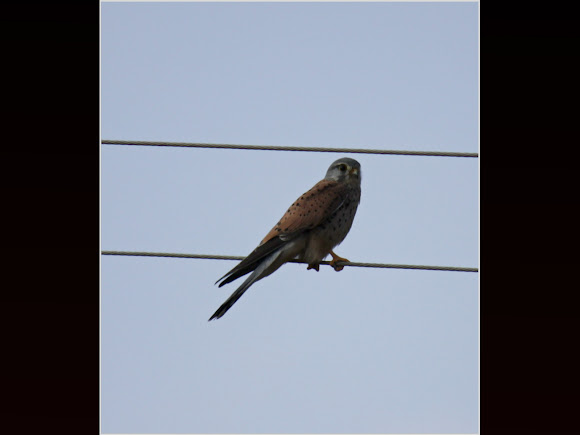 is a bird of prey species belonging to the kestrel group of the falcon family Falconidae. It is also known as the European Kestrel, Eurasian Kestrel, or Old World Kestrel. In Britain, where no other brown falcon occurs, it is generally just called "the kestrel". Common Kestrels measure 32–39 cm (13–15 in) from head to tail, with a wingspan of 65–82 cm (26–32 in). Females are noticeably larger, with the adult male weighing 136-252 g, Their plumage is mainly light chestnut brown with blackish spots on the upperside and buff with narrow blackish streaks on the underside; the remiges are also blackish. Unlike most raptors, they display sexual colour dimorphism with the male having less black spots and streaks, as well as a blue-grey cap and tail. The tail is brown with black bars in females, and has a black tip with a narrow white rim in both sexes. All Common Kestrels have a prominent black malar stripe like their closest relatives.

In the cool-temperate parts of its range, the Common Kestrel migrates south in winter; otherwise it is sedentary, though juveniles may wander around in search for a good place to settle down as they become mature. It is a diurnal animal of the lowlands and prefers open habitat such as fields, heaths, shrubland and marshland. It does not require woodland to be present as long as there are alternate perching and nesting sites like rocks or buildings. It will thrive in treeless steppe where there are abundant herbaceous plants and shrubs to support a population of prey animals. The Common Kestrel readily adapts to human settlement, as long as sufficient swathes of vegetation are available, and may even be found in wetlands, moorlands and arid savanna.