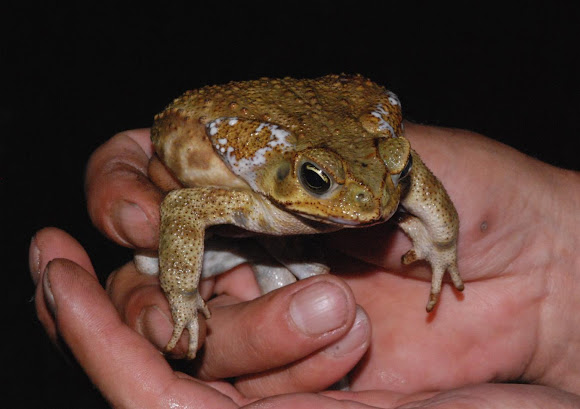 The marine toad is very large; the females are significantly longer than males, reaching an average length of 10–15 cm (3.9–5.9 in). The skin of the toad is dry and warty. It has distinct ridges above the eyes, which run down the snout. Individual toads can be grey, yellowish, red-brown or olive-brown, with varying patterns. A large parotoid gland lies behind each eye. The ventral surface is cream-colored and may have blotches in shades of black or brown. The pupils are horizontal and the irises golden. The toes have a fleshy webbing at their base, and the fingers are free of webbing.

The marine toad inhabits open grassland and woodland, and has displayed a "distinct preference" for areas that have been modified by humans, such as gardens and drainage ditches. In their native habitats, the toads can be found in subtropical forests, although dense foliage tends to limit their dispersal. Tadpoles have been found to tolerate salt concentrations equivalent to at most 15% that of seawater.

Yeah, I think we were typing at the same time...I was surprised because I didn't know they feasted on amphibian's - in addition to your comment as well. LOL

Is that a tick on it's back?

If you look at the parotoid glands, you can see white toxins oozing out. Also, note the second photo. I've never seen a tick on an amphibian before.