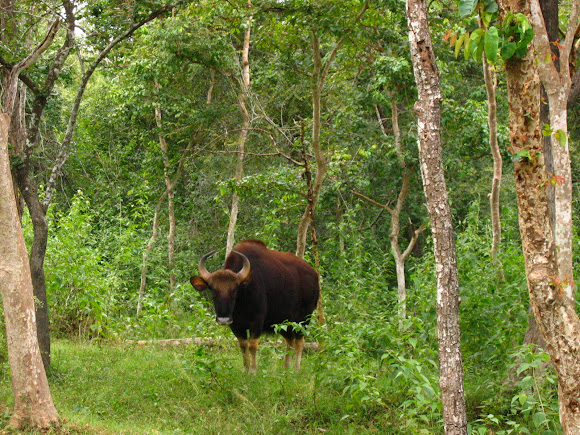 The gaur (Bos gaurus), also called Indian bison, is a large bovine native to South Asia and Southeast Asia. The species is listed as vulnerable on the IUCN Red List since 1986 as the population decline in parts of the species' range is likely to be well over 70% over the last three generations. Population trends are stable in well-protected areas, and are rebuilding in a few areas which had been neglected.

They are largely confined to evergreen forests or semi-evergreen and moist deciduous forests, but also occur in dry deciduous forest areas at the periphery of their range. Gaur habitat is characterized by large, relatively undisturbed forest tracts, hilly terrain below an altitude of 5,000 to 6,000 ft (1,500 to 1,800 m), availability of water, and an abundance of forage in the form of grasses, bamboo, shrubs, and trees. Their apparent preference for hilly terrain may be partly due to the earlier conversion of most of the plains and other low-lying areas to croplands and pastures