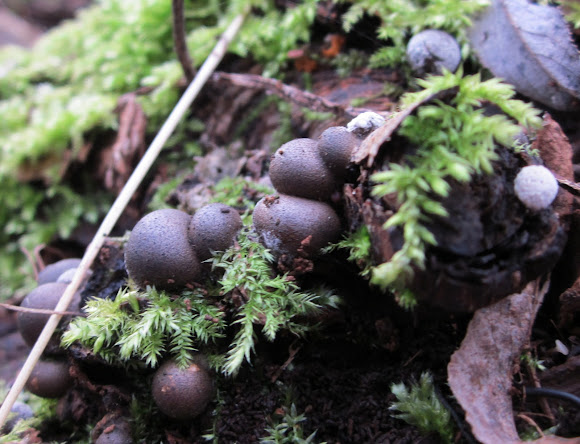 Lycogala epidendrum, commonly known as wolf's milk or groening's slime, is a cosmopolitan species of plasmodial slime mould which is often mistaken for a fungus. The aethalia, or fruiting bodies, occur either scattered or in groups on damp rotten wood, especially on large logs, from June to November. These aethalia are small, pink to brown cushion-like globs. They may excrete a pink paste if the outer wall is broken before maturity. When mature, the colour tends to become more brownish. When not fruiting, single celled individuals move about as very small, red amoeba-like organisms called plasmodia, masses of protoplasm that engulf bacteria, fungal and plant spores, protozoa, and particles of non-living organic matter through phagocytosis (see slime mould on wikipedia for more information). the spores for this spotting --> ( http://www.projectnoah.org/spottings/851... )

During the plasmodial stage, individuals are reddish in colour, but these are almost never seen. When conditions change, the individuals aggregate by means of chemical signaling to form an aethalium, or fruiting body. These appear as small cushion-like blobs measuring about 3–15 millimetres (0.12–0.59 in) in diameter. Colour is quite variable, ranging from pinkish-grey to yellowish-brown or greenish-black, with mature individuals tending towards the darker end. They may be either round or somewhat compressed with a warted or rough texture. While immature they are filled with a pink, paste-like fluid. With maturity the fluid becomes a powdery mass of minute gray spores. The spores measure 6 to 7.5 µm and are round in shape with a netted texture and appearing ochre to lavender in colour. The pseudocapillitia, sterile elements in the spore mass, are long, flattened, branching tubes with transverse wrinkles and folds

what is the round white one at th right of the first pictrure?

very interesting, did not know it