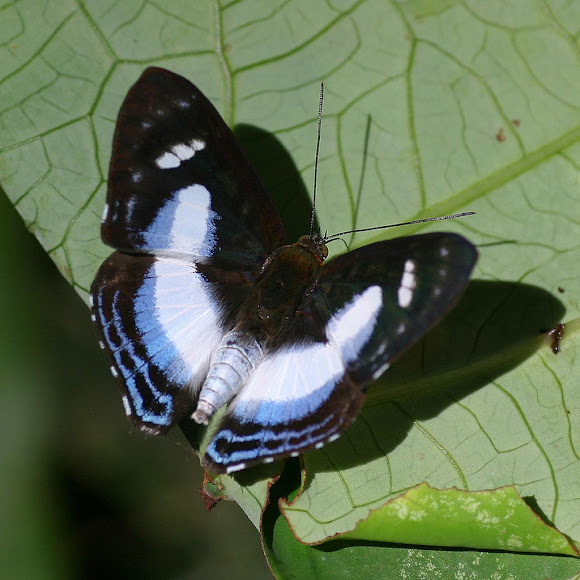 neotropical rainforest. What looks like sunny outside was actually in the middle of the Peruvian rainforest, but spotted by the sun through a whole in the canopy.

Very interesting: Philip DeVries discovered the substrate-borne calls produced by caterpillars that form symbioses with ants in the butterfly families Riodinidae and Lycaenidae. In these symbioses, ants provide protection against arthropod predators in exchange for food secretions. DeVries demonstrated experimentally that the calls produced by singing caterpillars function to enhance caterpillar-ant symbioses in concert with caterpillar glands that produce food and chemical secretions. He also has shown that singing caterpillars occur widely throughout the world. His studies were the first to show that acoustical calls of one insect species can evolve to attract unrelated species in the context of symbiotic associations, fitting into a field of biological science termed Bioacoustics. Documentation and examination of interactions between organisms of different species integrate the fields of Natural History, Ecology and Evolution. Source: Wikipedia Phil deVries: Mutualism between Thisbe irenea butterflies and ants, and the role of ant ecology in the evolution of larval-ant associations: Biological Journal of the Linnean Society Volume 43, Issue 3, pages 179–195, July 1991 Abstract: A facultative mutualism between the riodinid butterfly Thisbe irenea and the ponerine ant Ectatomma ruidum is described from Panama. Ants protect larvae against attacks of predatory wasps, but not against tachinid parasitoids. Several potential sources of ecological variation affecting the larval survival of Thisbe irenea are noted. A preliminary means of testing the ability of larvae to appease ants is described that may be applied to all butterfly-ant systems. Observations and literature records indicate that ant taxa which tend butterfly larvae are the same taxa that tend extrafloral nectaries and Homoptera. A general hypothesis for the evolution of myrmecophily among butterflies suggests that ant taxa which utilize secretions in their diet are major selective agents for the evolution of the larval ant-organs, and hence, ant-larval mutualisms. This idea is extended to suggest how appeasement of predaceous ant taxa through the use of larval ant-organs can influence an ant-larval relationship, eventually leading to mutualism. Summary: The drug produced by the caterpillar will change the ant's behaviour: The ants act like guards. Any predator, but for example not fungal parasites, will immediately be attacked and killed!

nice shot and thanks for information.......

Bioacoustics. Now I've heard everything. Actually I have not known of this phenomenon and do not know if it occurs in any Australian Lycenidae, or even in our one species of Libytheidae. I do know however that "The drug produced by the caterpillar will change the ant's behavior" and ants will attack even if I (predator) touch an unrelated distant branch.