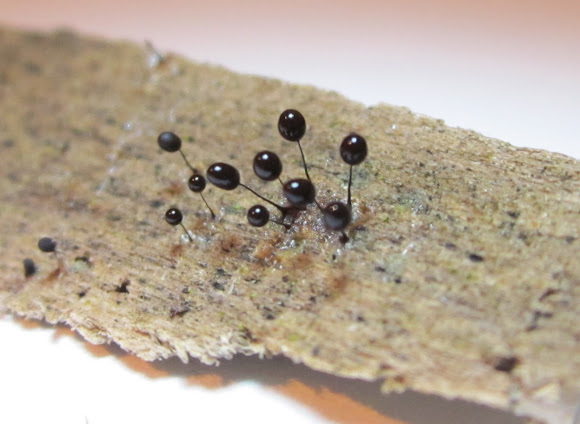 SPOROCARPS scattered or in small groups, up to 9 mm tall, though smaller and always ± spherical in moist-chambers. STALK usually at least 66% of the total height, black, consisting of netted fibres at least at the base. COLLUMELLA reaching at least half way up the sporotheca but usually almost reaching the apex, where it merges into the capillitium. [here the imature spotting ---> ( http://www.projectnoah.org/spottings/851... ). Here are the spores of this spotting---> ( http://www.projectnoah.org/spottings/851... )]

Incredible, you really have wonderful photos! :)

thanks guys, i count them to one of my favorites. At the begin, when i spot them outside they were jelly/white. In was amazed at home , when i saw the change some hours later.

They look like sewing pins.
Quite a unique find!! :)

Amazing. They look like little needles from my mums sewing box.

Wow, I haven't seen that. Amazing. I miss working with microscopes :(

thanks, cindy (don't know if you seen this already) take a look at this ( http://www.projectnoah.org/spottings/851... ), first time i find/see it myself, it was between this specimen!!

here was gone something wrong_first time uploading. i had to repost everything. now is everything complet = part 1-3. Thanks smutnee80, i also find them very intresting, and it was the first time for me too, to see this species.