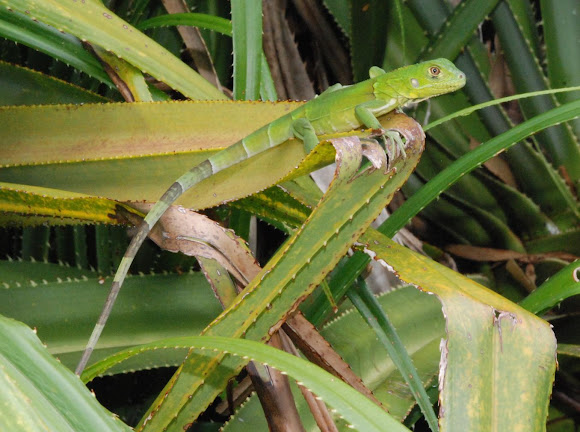 The green iguana or common iguana is a large, arboreal herbivorous species of lizard of the genus Iguana native to Central and South America.

The green iguana ranges over a large geographic area, from southern Brazil and Paraguay to as far north as Mexico and the Caribbean Islands; and in the United States as feral populations in South Florida (including the Florida Keys), Hawaii, and the Rio Grande Valley of Texas. Green Iguanas are diurnal, arboreal, and are often found near water. Agile climbers, Iguana iguana can fall up to 50 feet (15 m) and land unhurt (iguanas use their hind leg claws to clasp leaves and branches to break a fall). During cold, wet weather, green iguanas prefer to stay on the ground for greater warmth. When swimming, an iguana remains submerged, letting its four legs hang limply against its side. They propel through the water with powerful tail strokes.

The second photo shows how hard it would be to capture this lizard while sitting in a plant with razor sharp spines. I didn't even try and I know predators would also think twice.